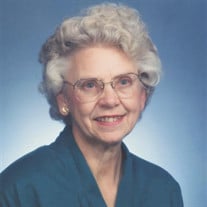 Norma Juliet Steinbron was born September 20, 1932, in Renville, Minnesota, the sixth of seven children born to James and Esther (Schuetz) Jacobson. She grew up on the family farm in the Buffalo Lake area and graduated from Buffalo Lake High School in 1950. After graduation, Norma moved to Minneapolis, Minnesota to live with her sister and find work. It was here that she met the love of her life, Harold Steinbron. Though interested in her, Harold told Norma that he couldn't date her unless she was a Christian. He soon led her to the Lord, whom she has loved and served for more than 70 years. Norma and Harold married June 30, 1952 and began a life of adventure together. During their life together, they were faithful to serve in church, teaching and sometimes singing together as Harold accompanied on the accordion. After marriage, they moved to Milwaukee, Wisconsin. They both attended classes at Milwaukee Bible College while Harold also worked for the railroad. In 1955, Rondo joined the family, followed by Melody in 1957. After Harold completed watchmaking school, the family moved to Milledgeville, Illinois. Bible reading and Bible study were a priority in the Steinbron household, with Bible reading taking place after every meal. After being told that Harold needed to move to a dryer climate, the family searched for a new home. After traveling to Phoenix in the summer, they ruled that city out. They settled in Cashion in the fall of 1969 and this has been Norma's home ever since. Besides raising children and running a household, Norma was a caregiver for some of the older ladies in Cashion. After Harold died in 1991, she went to work for AETNA insurance for a few years. After retiring, she helped Rondo in his business as unofficial secretary. Norma is survived by her son Rondo Steinbron and his wife Letha, their children Nathan and Audrey, Son-in-law Larry Blair and his wife Daneta, Grandsons Steven Blair, Tim Blair and his wife Amanda, their children Destini and Michael, and Granddaughter Bethany Stone and husband Bryant. Norma passed into the arms of Jesus February 25th at 89 years young. She loved her family, her church body, her pastor, and her Lord most of all. She was gracious and kind, living out Romans 12:18, “If it is possible, as much as depends on you, live peaceably with all men.” She will be greatly missed. Services to remember and celebrate Norma's life will be held Tuesday, March 8, 2022, at First Baptist Church in Cashion, OK, at 4:00PM.

Norma Juliet Steinbron was born September 20, 1932, in Renville, Minnesota, the sixth of seven children born to James and Esther (Schuetz) Jacobson. She grew up on the family farm in the Buffalo Lake area and graduated from Buffalo Lake High... View Obituary & Service Information

The family of Norma Steinbron created this Life Tributes page to make it easy to share your memories.

Send flowers to the Steinbron family.