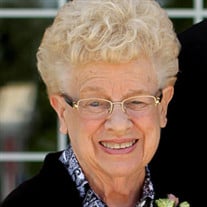 Norma M. Till Miller, age 93, passed away peacefully on July 28, 2020. Norma was born to Arthur C. and Mae Schneider (Travis) on October 9, 1926 in Dubuque, Iowa. At age 3 the family moved from Galena, Illinois to Bellevue, Iowa. Norma graduated from Bellevue High School in 1944 and attended the University of Iowa, graduating with a B.S. in Political Science in 1948. She married her high school sweetheart, Donald F. Till, on May 14, 1948 in Iowa City. Norma worked in the Acquisitions Department of the University of Iowa Library until 1954, when Don’s career with JCPenney began with several relocations for the family, the last being to Montevideo, Minnesota in 1968. While raising two daughters, Norma and Don were active in the community, especially in support of Montevideo’s Fiesta Days. Following Don’s death in 1978, Norma worked at Arneson Drug and later married George L. Miller in 1984. A breast cancer survivor at age 36, Norma became an active volunteer with Reach for Recovery. She also enjoyed singing in the church choir, was an avid golfer and loved to travel, enjoying many European trips with family. In 1999 Norma and George moved to Edmond so Norma could be closer to her family. George passed away in 2001 and in 2013 Norma moved into Touchmark, an independent living community, where she enjoyed playing bingo, bridge, watching golf and becoming a big OSU fan as well as cheering for the Thunder. Norma also enjoyed playing chimes and was a long-time member of the Golden Harmonizers. Norma was recently honored as a 75-year member of the P.E.O. Sisterhood and was an active member of Chapter CT, Oklahoma City. She is survived by her two daughters, Barb (Steve) Ruel, Southlake, TX; Doe (Clint) Till-Schwab, Edmond, OK; step-daughters, Jude (Stan) Ragnes, Plymouth, MN; Carol (Carl) Christensen, Hayward, WI; and step-son, Jim (Ruth) Miller, Champlin, MN. She is also survived by one brother, George Schneider, eleven grandchildren and step-grandchildren, several great grandchildren, and numerous nieces and nephews. Interment will be in the First Presbyterian Cemetery, Bellevue, Iowa at a later date. Memorials may be made to the American Cancer Society at cancer.org or to the P.E.O. Foundation at peointernational.org.

The family of Norma Mae Miller created this Life Tributes page to make it easy to share your memories.

Norma M. Till Miller, age 93, passed away peacefully on July...