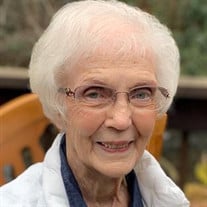 A special gift to us all, Norma June Evans, went to heaven on Monday, April 11, 2022 Norma was born on October 18, 1932, in Lone Wolf, OK to Charlie and Nora Wygle. As the youngest of twelve, she was raised and received her education in Port, Oklahoma, graduating from Port High School. As a teenager she was a “strutter” in the Port High School Band. From their earliest school years Bill and Norma knew each other but it wasn’t until High School that the two began to date and quickly became soulmates. After Graduating, the two wed on September 27th, 1950. Bill and Norma began their married life in Burns Flat, Oklahoma, where Bill operated a bulldozer serving the farmers in the area. He was then given orders to serve in the Army for 18 months in Germany during the Korean War. Once Bill returned, the two started their family together with the adoption of their first daughter Nancy in 1957. It was at this time that Bill’s work, in road construction, moved the young family to Glasgow, Montana, where they resided for four years. In 1961, they moved to Cordell, Oklahoma and continued to grow their family by adopting their second daughter Kelley. Five years later they moved to Alfalfa, Oklahoma where the family resided until 1991. The family was active as members of Alfalfa Baptist Church. Norma was employed at The Farmers Bank in Carnegie, Oklahoma for 33 years. In her years with the bank, Norma worked some of that time for the Johnson Insurance Agency. After her husband’s passing in 1986, Norma sold her home in Alfalfa, and moved to Weathorford, Oklahoma where she grew to love and serve the people of Pine Acres Church. She faithfully taught women’s bible study there for several years. Norma moved to Edmond, OK in 1999 where she began working at S.A.S shoes and joined Heritage Baptist Church where she was a faithful member for the remainder of her life. Norma was preceded in death by her husband, Bill Evans, her 11 brothers and sisters, her daughter Nancy Trotter, and her son-in-law Rocky La Marr. She is survived by her daughter Kelley La Marr, her five grandchildren, and seven great grandchildren. A service to remember and celebrate Norma's life will be held Wednesday, April 13, 2022, at Heritage Baptist Church in Oklahoma City at 10:00AM. Visitation will be held throughout the day prior, Tuesday, April 12, 2022, from 12:00PM-8:00PM with the family of Norma present from 6:00PM-8:00PM at Crawford Family Funeral Service in Edmond. Burial will take place at Sentinel Cemetery following services Wednesday.

A special gift to us all, Norma June Evans, went to heaven on Monday, April 11, 2022 Norma was born on October 18, 1932, in Lone Wolf, OK to Charlie and Nora Wygle. As the youngest of twelve, she was raised and received her education in Port,... View Obituary & Service Information

The family of Norma June Evans created this Life Tributes page to make it easy to share your memories.

A special gift to us all, Norma June Evans, went to heaven on...

Send flowers to the Evans family.