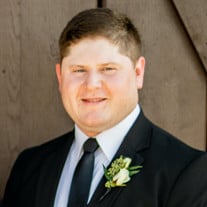 With deepest sorrow, we announce Nolan Wayne Reasnor, age 27, our most beloved son, brother, family member, and friend, passed suddenly on Tuesday, February 4, 2020, in Sherman, Texas. He was born in Okeene, Oklahoma, on May 7, 1992. Nolan is the cherished and beloved son of Kenneth and Felicia Nusz Reasnor of Cashion, Oklahoma. He is the loving brother of Ty, and wife Kelley, of Oklahoma City, Oklahoma, and Madison of Philadelphia, Pennsylvania, and her fiancé James Paron, of Burlington, Ontario, Canada. Nolan is the adored grandson of Terry and Rebecca Reasnor of Edmond, Oklahoma, and James and Twilla Nusz of Okeene, Oklahoma. Nolan is loved by many including his aunts and uncles, Brian and Dianna Reasnor McDowell of Edmond, Oklahoma, Angela Reasnor Hannah of Yukon, Oklahoma, Jennifer Reasnor of Edmond, Oklahoma, and Francis and Sabrina Nusz Nault of Kingfisher, Oklahoma; cousins Zoe and Brynn McDowell of Edmond, Oklahoma, Nicholas and Rylee Hannah of Yukon, Oklahoma, Logan Nault of Oklahoma City, Oklahoma, Landon and Ericka Nault of Yukon, Oklahoma, and many extended family and friends. Nolan and the love of his life, Kaley Green of Durant, Oklahoma, were to wed on February 29, 2020. Kaley was a blessing to Nolan and will always be loved as a daughter and family member. Nolan grew up in Cashion, Oklahoma, where he graduated as a Valedictorian from Cashion High School in 2011. In high school, Nolan was active in baseball, basketball, football, and FFA. He then attended Oklahoma State University where he was a member of the Sigma Chi Fraternity and obtained bachelor’s and master’s degrees in Petroleum Geology. In his spare time, Nolan loved fishing, duck hunting, and spending time in the great outdoors with his beloved bloodhound, Ann. Nolan spent countless hours in his woodshop where he handcrafted numerous items including tables, cutting boards, ring boxes, and chessboards for his friends and loved ones. Nolan perfected his woodworking skills to the finest of detail. Nolan was an avid OSU fan, always seen wearing America’s Brightest Orange. From wrestling to football, Nolan was always in attendance to cheer on his Cowboys. Nolan worked in maintenance for Plains All American-Cushing Terminal for two summers while working toward his bachelor’s degree. He also interned with Plains Marketing performing oil and gas analytical work. While working on his master’s degree, Nolan worked at Territory Resources in Stillwater, Oklahoma, as an Assistant Geologist where he developed a very strong bond with his coworkers. Most recently he was employed as a Geological Engineer for Halliburton, working in Oklahoma, Texas, Alaska, and the Gulf of Mexico. The family requests your presence at a come-and-go visitation and reception at Crawford Funeral Service, 610 NW 178th Street, Edmond, Oklahoma, on Monday, February 10, 2020 from 5 – 7 pm. Funeral services will be Tuesday, February 11, 2020 at Edmond’s First Baptist Church, 1300 E 33rd Street, Edmond, Oklahoma at 10:30 am, followed by burial at Roselawn Cemetery in Okeene, Oklahoma. In lieu of flowers, donations can be made in Nolan’s memory with checks payable to Oklahoma Department of Wildlife Conservation (ODWC) memo line Nolan Reasnor. ODWC Attn: Lt. Col. Wade Farrar, PO Box 53465, Oklahoma City, Oklahoma 73105.

With deepest sorrow, we announce Nolan Wayne Reasnor, age 27, our most beloved son, brother, family member, and friend, passed suddenly on Tuesday, February 4, 2020, in Sherman, Texas. He was born in Okeene, Oklahoma, on May 7, 1992. Nolan... View Obituary & Service Information

The family of Nolan Wayne Reasnor created this Life Tributes page to make it easy to share your memories.

Send flowers to the Reasnor family.