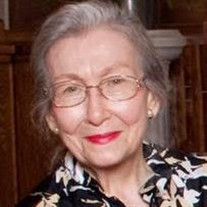 Nancy Ann Gordon Sewell, age 88, passed away peacefully on December 9, 2018. She was born in the heart of Baltimore, Maryland on November 28, 1930 to loving parents Albert Gordon Jr. and Margaret Roder Gordon. She graduated from Eastern Girls School in Baltimore in 1948. Her upbringing led her to be comfortable talking with anybody and everybody she met. She had a genuine true respect for people regardless of status, age, or intellect. Her concern for her friends, family, and others was her primary focus throughout her life. She often recounted stories of being gathered around the piano with her family as a child, which fostered her lifelong love of music. She was a voracious reader, and she had an incredible depth of knowledge about a vast array of topics. Nancy met Eugene (Gene) Sewell at the beach in Ocean City, Maryland on July 4, 1952, while he was on leave during his military training. After marrying on November 20, 1954, they moved to South Texas where Gene began his career as an oil and gas geologist. They returned to Oklahoma and lived in Oklahoma City for most of their 64 years of marriage. Along with caring for any friend or neighbor in need, she was previously involved in Linwood Methodist Church, Geologist Wives, and was an early member of Oklahoma City Neighborhood Alliance. Nancy was preceded in death by her parents, her brother Albert (Bud) Gordon, her infant son, Curtis, and most of her cherished friends. She is survived by her husband Gene and sons Mark Sewell (Kathy) of Edmond and son Randall Sewell (Kay) of Norman; along with granddaughters Lauren Horton (George), Jamie Delpha ( Joe), Rainey Sewell, and Kasey Sewell. She also has four great grandchildren, Brady, Graham, Hannah, and Kate. The family is deeply appreciative of the staff of Epworth Villa and Dr. Dean Drooby for their loving and compassionate care of Nancy during the last years of her life. A private family memorial will be held at a later date. The family suggests an act of kindness for someone in need be performed as a memorial to Nancy.

Nancy Ann Gordon Sewell, age 88, passed away peacefully on December 9, 2018. She was born in the heart of Baltimore, Maryland on November 28, 1930 to loving parents Albert Gordon Jr. and Margaret Roder Gordon. She graduated from Eastern Girls... View Obituary & Service Information

The family of Nancy A. Sewell created this Life Tributes page to make it easy to share your memories.

Send flowers to the Sewell family.