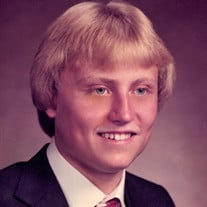 James Murray Carpenter passed into the arms of his Lord Jesus Christ peacefully in his home Monday, October 5, 2020 after a brief unexpected illness. Murray was born on March 22, 1966 in Denver, CO to parents Ernest Jimmy Carpenter and Mary Rebecca (McCourry) Carpenter. He is survived by his parents, Edmond, OK, sister Courtney (Mark) Lewallen, Kingwood, TX., aunt Martha (Russell) Robinson, Tulsa, OK., nephews, Zach (Megan) Lewallen, Smyrna, GA, Ford Lewallen, Fayetteville, AR, Caleb (Rana) Lewallen, Northlake, TX, nieces, Rebecca (Rafael) Costa, Pearl, MS., and Grace and Katy Wray, Edmond OK. He was predeceased by his uncle, Michael Wray. When he was 8 years, Murray moved to Edmond, OK with his parents and sister from Houston, TX. He graduated from Edmond Memorial High School in 1985. Murray managed two business establishments for 25 years, worked as a ranch hand, rodeo clown and in construction in and around Edmond. A quote from one of his dear friends, “Murray was really a private person. He had a lot of people that he associated with, but only a few friends that he could really talk to. He knew how alcohol, drugs and drama affected people. He was friendly to everyone, but if he didn’t feel comfortable, he would move on to someone else. Back to my old saying: Murray is just Murray!! And to me that was a good thing!!” Murray’s means to an end was not to accumulate wealth but to use his resources to make other people happy. He was a purveyor of stray or dumped dogs and “gifted” several to his friends and family, some of which became loved lifetime pets. A graveside service and interment will be on Friday, October, 9th at 11:00 a.m. at Memorial Cemetery, Oklahoma City, OK. Viewing will be come and go Thursday October, 8th from 10 a.m. till 7 p.m. at Crawford Family Funeral Home, 610 NW 178th, Edmond, OK.

James Murray Carpenter passed into the arms of his Lord Jesus Christ peacefully in his home Monday, October 5, 2020 after a brief unexpected illness. Murray was born on March 22, 1966 in Denver, CO to parents Ernest Jimmy Carpenter and Mary... View Obituary & Service Information

The family of Murray Carpenter created this Life Tributes page to make it easy to share your memories.

James Murray Carpenter passed into the arms of his Lord Jesus...

Send flowers to the Carpenter family.