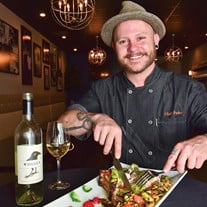 Michael Robert Paske was born March 12, 1980 and passed from this life on September 17, 2020 at the age of 40. He was a beloved father, husband, son, friend and chef and he left this earth far too soon. There will never be another “Paske”. He is survived by his wife, Audrey, of Edmond; and precious daughters Bailey (12) and Charlie (2); parents Jay and Julie Nelson of Edmond; mother-in-law Debbie Pace of Edmond; father-in-law David Horn; and brothers Joshua Nelson of Yukon and Daniel Nelson of Bethany. He also leaves behind a niece, Brieona Nelson of Yukon; grandmothers Susan Branigan of Rio Rancho, NM, Sonja Narde of Warr Acres and BJ Dafforn of Lawton, OK; aunts and uncles, Tom Dafforn and family of Tulsa, Sandy Madrid and family of Villanueva, NM, Nancy Gaudette and family of Denton, TX, Steve Nelson and family of North Andover, MA, Rodney Nelson and family of Warr Acres and Kerri Hudson and family of OKC. He is preceded in death by his grandfather Robert Dafforn and aunt Sally Mobley. Paske was born in Oklahoma City and attended Putnam City Original High School where he lettered in football and graduated in 1999. After working in various restaurants around the OKC metro, he had the opportunity to refine his skills under Chef Kurt Fleischfresser as a part of the Coach House Apprenticeship program. He furthered his career at Café 7, Boulevard Steakhouse, The Hamilton, and was currently working under a Michelin-star chef at Fait Maison in Edmond. His pride and joy were his two daughters, Bailey and Charlie. Those who worked in kitchens with Paske know Bailey well, affectionately known as “Biscuit.” She was her dad’s sidekick; he bought her numerous chef’s coats and he taught her how to cook from a very young age. If you’ve been around him lately, you have undoubtedly heard him brag about his little red-headed nugget Char! He was so proud of his girls and tried to be a role model in every way. Paske was well-known for his innumerable hours of volunteering for charity events across the city. Most notably, his work with Oklahoma ProStart, Chef’s Feast, The Homeless Alliance, Turning the Table on Hunger, Turkey Tango and Odyssey de Culinaire. He had a heart for helping people and never said no to helping out when asked. In his own words, “I’m inspired by the many Oklahoma chefs who have come before me, like Chef John Bennett and Chef Fleischfresser, as well as new young chefs in the state who are pushing the envelope. My aspirations are to create a platform to help inner city kids gain access to cooking knowledge and nutrition.” His friends and family remember him as a person who always checked in on them. He sent texts and made phone calls just to encourage people and let them know he was there. He said, “I love you” all the time to friends, family, acquaintances, etc. If you knew Michael well, he probably told you he loved you quite often. A Memorial Service will be held on Monday, October 5, 2020, at 2:00pm at the Myriad Botanical Gardens. In lieu of flowers, donations can be made to the Paske Fund through the Oklahoma Hospitality Foundation which will be used to set up a trust for his girls. You can also give to any of the local charities that he was passionate about!

The family of Michael R. Paske created this Life Tributes page to make it easy to share your memories.

Send flowers to the Paske family.