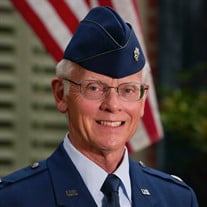 A service celebrating the life of Lt. Col. Michael A. Miller will be at 1:00pm on Friday, January 3, 2020 at the First Christian Church in Edmond. Burial will follow with full military honors at Memorial Park Cemetery. Michael Alan Miller was born May 6, 1947 in Ponca City, Ok. He was the son of Ernest and Lila Huff Miller. He grew up in the Ponca City Christian Church where he was active in the youth groups, choir, and Boy Scouts. He graduated from Ponca City High School in 1965 and attend NOC in Tonkawa for one year. He then entered the United States Air Force in June 1966. Michael married his high school sweetheart, Kathy Watts on Dec 17, 1966. They moved to Bergstrom AFB in Austin, Tx, where he began his military career. Upon honorable discharge, they returned to Ponca City where he completed his Associates Degree at NOC. He then continued his education and graduated from Oklahoma State University with a degree in Business Administration. After joining the Air Force in 1966, his decorated military career spanned decades with the Air Force as well as the Air Force Reserves. He served in many capacities within his career but most notably as Commander, 507th Mission Support Group, 507th Air Refueling Wing, Tinker Air Force Base, Oklahoma. Michael had earned many decorations during his time of service including the Meritorious Service Medal with 3 oak leaf clusters, Air Force Commendation Medal, Air Force Achievement Medal and the Meritorious Unit Award. He was promoted to Lieutenant Colonel on September 28, 2001. Following his career in the Air Force, Mike served a second career in Federal Civil Service. During this time, he served in numerous leadership capacities of the Oklahoma City Air Logistics Center and most recently as the Chief of Plans and Programs for the Management Operations Branch of the 448th Supply Chain Management Wing. He was a long time member of Midwest Blvd Christian Church in Midwest City where he and wife Kathy served as elders & adult sponsors for various youth groups. Upon retirement, Mike enjoyed building Pine Wood Derby cars with his grandsons, Cub Scout camp outs, his involvement in the Corvette Club, American Legion Huff-Minor Post 14 in Ponca City and serving his family in any way they needed him. He was preceded in death by his parents, younger brother Philip Lee Miller, and his son-in-law Ryan Veirs. He is survived by his spouse, Kathy, daughter Shannon, and husband Scott , son Chad and wife Cassie, daughter Lori, grandchildren Brendon, Katelyn, Ethan, Avery, Ryan, Karsten, and Kade. His brother-in-law Stan Watts, cousins, nieces & nephews. A service celebrating Mike’s life will be at 1:00 PM on Friday, January 3, 2020 at the First Christian Church in Edmond under the direction of Crawford Family Funeral Service, Edmond. Burial will follow with full military honors at Memorial Park Cemetery, Oklahoma City. Memorial donations may be made in Mike’s name to: American Legion, Huff-Minor Post 14 Foundation (PO Box 2102, Ponca City, OK 74602).

A service celebrating the life of Lt. Col. Michael A. Miller will be at 1:00pm on Friday, January 3, 2020 at the First Christian Church in Edmond. Burial will follow with full military honors at Memorial Park Cemetery. Michael Alan Miller... View Obituary & Service Information

The family of Lt. Col. Michael A. Miller created this Life Tributes page to make it easy to share your memories.

A service celebrating the life of Lt. Col. Michael A. Miller...