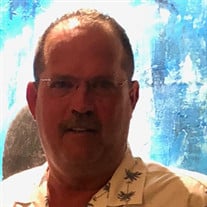 A come-and-go visitation and reception will be from 6-8pm on Wednesday, August 14th at Crawford Family Funeral Service. A service celebrating Mr. Lowrie's life will be at 2:00pm on Thursday, August 15th at North Pointe Baptist Church with burial following at Memorial Park Cemetery. Michael “Mike” Layne Lowrie, 58, passed away on August 12th, 2019 in Oklahoma City, OK in the comfort of his own home with his family surrounding him. Mike was born on January 3, 1961 in Denton, Texas to Norman “Skeeter” Wayne Lowrie and Greta Katherine (Martin) Lowrie. He graduated from Ponca City High School in 1979 and then from Central State University with a BA degree in Business Administration in 1989. Mike married the love of his life Ronda on May 28th, 1988 and they had two beautiful girls, Kaylan and Jamie. The family started attending Village Baptist North/North Pointe Baptist Church in 1997. Mike accepted Christ at a young age, believed in God’s greater plan and is now dancing up a storm with angels. Mike was always thankful for the life he was blessed with and loved being a husband, father, brother, son, leader, coach and friend. Many have stated that they saw him as a father figure as well. Mike enjoyed taking trips to Cancun, watching softball games and college football, talking about his girls, and rooting for the Dallas Cowboys and the Oklahoma City Thunder. He worked for Hitachi Computer Products (America), Inc. for 11 years and 6 months and had a lasting impact on many people through his tenure. He was a mentor and leader to so many; known by his coworkers to walk with integrity, provide energy, loyalty, honesty and that takes courage. Mike loved his job and simply cared deeply for those who reported to him. He had a higher standard than anyone, and always demanded every ounce of excellence, effort, and attention. Mike was preceded in death by his father Norman “Skeeter” Wayne Lowrie and grandparents Ike and Mary Katherine Martin and Joe and Viola Edwards. He is survived by his wife Ronda, daughters Kaylan Lowrie and Jamie “Lowrie” Overton (Jacob); his mother Greta Lowrie; siblings Martin Lowrie (Glenda), Kenneth Lowrie (Billie), Kathy “Lowrie” Russell (Bobby), Brad Lowrie (Connie); and several other loved ones including nieces, nephews, and several other family and friends. Visitation will be on Wednesday, August 14th from 6:00-8:00 p.m. at Crawford Family Funeral & Cremation Service in Edmond and the funeral service will be at 2:00 p.m. on Thursday, August 15th at North Pointe Baptist Church in Edmond. Interment will be at Memorial Park Cemetery in Oklahoma City following the service. Memorial gifts can be made in lieu of flowers to Mercy Health Foundation. Proceeds will be designated for Coletta Cancer Center Project Early Detection. Mercy Health Foundation 13321 N. Meridian, Suite 206 Oklahoma City, OK 73120 www.mercyhealthfoundation.net/communities/oklahoma-city

A come-and-go visitation and reception will be from 6-8pm on Wednesday, August 14th at Crawford Family Funeral Service. A service celebrating Mr. Lowrie's life will be at 2:00pm on Thursday, August 15th at North Pointe Baptist Church with burial... View Obituary & Service Information

The family of Michael Lowrie created this Life Tributes page to make it easy to share your memories.

A come-and-go visitation and reception will be from 6-8pm on...

Send flowers to the Lowrie family.