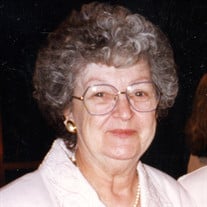 Betty Swearingen was born May 11th, 1927 in Birmingham, AL to Stephen Douglas and Rita Mary Tinney. She passed away on Saturday, November 16th, 2019 at the age of 92. Betty spent the first years of her life in Louisiana with her family, then moving to Houston, TX when she was 4 years old. She graduated from John Reagan High School and became employed. It was during this time Betty met and married Dale Swearingen on June 2nd, 1951. The story was told by friends who knew them that at the time, Betty was taking the public bus routinely to work. Dale, who was driving the bus for this route was taken with her and began to change his route so that Betty wouldn’t have to walk as far to reach her stop. It was the beginning of a lifelong love and a wonderful life together. Dale, who earned his bachelor’s degree in petroleum engineering, and Betty lived for a number of years in Louisiana and Texas before moving to Duncan and eventually Oklahoma City where they spent the remainder of their years. Dale and Betty raised four sons, giving sacrificially of themselves so that their boys would get a good education. Dale and Betty were always very proud of what their boys had accomplished; Jerry – Doctorate in Aerospace Engineering, Rick - Doctorate in Osteopathic Medicine, Don – Doctorate in Dental Surgery, and Chris – Doctorate in Veterinary Medicine. Betty is preceded in death by her husband, Dale Donald Swearingen; her parents, Stephen Douglas and Rita Mary Barnard Tinney; brothers, Albert Douglas Tinney, Stephen Douglas Tinney Jr., William Leo “Bill” Tinney and Raymond Joseph Tinney; sisters, Ella Rita “Sister” Helfrich, Doris Frances “Binks” Ford and Virginia Leonie Hall. Betty is survived by her children, Jerry and wife Elizabeth Swearingen and children, Kevin, Sarah and Katherine; Rick and wife Denise Swearingen and children, Cole, Allison and Tyler; Don and wife Lisa Swearingen and children, Garrett and Logan; and Chris Swearingen and daughter Mariella. Betty’s greatest loves in life were her husband, her boys and her grandchildren. She loved planting flowers and was the worlds best cook, had her famous molasses cookies always at the ready for her grandchildren, kept the freezer in the garage constantly stocked with “Freezer pops” for the neighborhood kids who constantly played basketball in her and Dale’s driveway and was herself, an incurable sweets lover. She lived an honorable life of love, generosity and service to her family, her church and her friends and will be dearly missed but lovingly remembered by all who were fortunate enough to have known her. Come-and-go visitation for Betty will be held on Sunday, November 24, 2019 from 9 to 10 a.m. at Crawford Funeral Service, 610 NW 178th St. Edmond, OK 73012. The family will be having a private graveside service.

Betty Swearingen was born May 11th, 1927 in Birmingham, AL to Stephen Douglas and Rita Mary Tinney. She passed away on Saturday, November 16th, 2019 at the age of 92. Betty spent the first years of her life in Louisiana with her family, then... View Obituary & Service Information

The family of Mary "Betty" Swearingen created this Life Tributes page to make it easy to share your memories.

Send flowers to the Swearingen family.