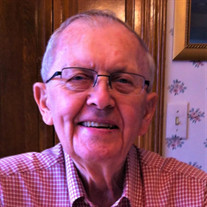 Marvin Chester Weber, 84, passed away peacefully on July 17, 2020 in Oklahoma City. M.C., as he was known to family and friends, was born at home on April 2, 1936 in Southard, Oklahoma to Reuben and Edna Weber. He attended Southard School for 12 years and graduated in 1954. While in school, he met his future wife, Elizabeth Louise Weber. They married in 1955. M.C. went on to attend Southwestern Oklahoma State University. It was there that he discovered his love for science. He graduated with a bachelor’s degree in secondary science education. After graduation, M.C. taught science at Clinton high school for two years and drove a school bus. He then received a National Science Foundation scholarship to attend the University of New Mexico for one year. While there, he received his masters of education degree. He and his family then returned to Oklahoma where he taught science in Taloga schools for one year and again at Clinton high school for four years. In 1964 M.C. accepted a teaching position at Southwestern Oklahoma State University (SWOSU) where he remained teaching for 32 years. During this time he also received his doctorate degree from the University of Oklahoma. He taught geology, weather, photography, and science for elementary teachers. Upon his retirement from SWOSU, he was awarded Emeritus status. M.C. was very proud of his teaching career and enjoyed telling his friends and family his fond teaching memories. He was also a writer and enjoyed writing throughout his life and had several published works including his well researched and popular book about the history of Roman Nose State Park. Additionally, some of M.C.’s fondest memories were his many trailer trips he took with his family over the years. Those left to cherish his memory are his loving wife, Elizabeth Louise Weber of the home; his brother and his wife, J.C. and Thelma Weber of Canton, Oklahoma; his sons and their spouses, Steve and Kay Weber of Southard, Oklahoma and Lee and Kim Weber of Springtown, Texas; two nephews, Adam and David Weber; ten grandchildren, Brett, Brian (Maha), Christopher (Erica), Elizabeth, Micah, Kayla (Fernando), Chad and eleven great grandchildren, Chisum, Colsten, Gracie, Carter, Eliel, Mikay, Addisen, Briten, Eli, Kaysen, and Mayson. He was preceded in death by his father and mother, Reuben and Edna Weber. Due to limitations because of COVID-19, a small memorial service will be conducted by Crawford Family Funeral Service for the immediate family. The family wishes to thank the many that have offered words of encouragement and love including extended family members, former colleagues, and cherished friends. In lieu of flowers, the family requests donations be made to the Alzheimer’s Association or a charity of your choice.

Marvin Chester Weber, 84, passed away peacefully on July 17, 2020 in Oklahoma City. M.C., as he was known to family and friends, was born at home on April 2, 1936 in Southard, Oklahoma to Reuben and Edna Weber. He attended Southard School for... View Obituary & Service Information

The family of Marvin Weber created this Life Tributes page to make it easy to share your memories.

Send flowers to the Weber family.