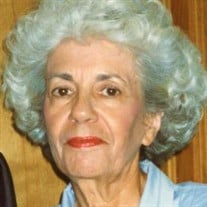 Mary Irene (Henry) Merriott was born January 20, 1925, to Dewitt Clinton and Lou Irene (Lindley) Henry. She graduated from Chelsea High School as Salutatorian in 1943. She attended Oklahoma University where she pledged Chi Omega sorority. She recently received a certificate, recognizing her 75 years in the Chi Omega sisterhood. Mary married Robert L. Merriott on April 16, 1950. Two children were born of that marriage, Vicki Ann and Christopher Lee. Mary was a member of the First Presbyterian Church in Chelsea, and when she and Robert moved to Claremore in 1979, she transferred her membership to the First Presbyterian Church there. Mary was preceded in death by her parents; her husband, Robert; sister, Dorothy Larry, and her brother, Dewitt Clinton Henry, Jr. Survivors include daughter, Vicki Merriott, of Edmond, OK; son, Chris, of Chelsea, OK; grandchildren, Michael Merriott and wife, Kayla, Ryan Merriott and wife, Amanda, and great-grandchildren, Mason, Scarlett, Morgan, and McKinlee. A graveside service will be held to remember and celebrate Mary’s life Friday, April 5, 2019, at 1:00PM at Woodlawn Cemetery in Claremore, OK. Services are under the direction of Crawford Funeral Service in Edmond, OK.

The family of Marry H. Merriott created this Life Tributes page to make it easy to share your memories.

Send flowers to the Merriott family.