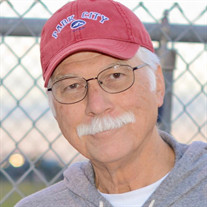 Marlin was born on his Uncle's farm, at sunrise, on September 12, 1942, to his parents Curtis and Gail Jones of Hydro, Oklahoma. He was blessed two years later with a loving sister, Claudia, that adored and respected her big brother. He was raised in a close, small town America lifestyle where everyone knew everybody, rode their bikes until sunset, played sports, and always attended the Fall fair that still holds the title of “Oklahoma's Oldest Free County Fair” in Hydro, Oklahoma. He was raised on a farm where he learned a strong work ethic, right from wrong, respect for his country and his elders, and most importantly…how to throw a baseball and dribble a basketball. Anyone who knew Marlin, knew he LOVED Sports! He did as he was told by his parents, always did his chores, and worked as a teenager with his Dad on the farm because he knew if he didn’t, he wouldn’t get to play baseball with his friends. He had many friends, but a few were special. So special that when he was 17, he and his friends, Bob and Gary Davis and Richard Spees, started a 60-year tradition of going to see professional baseball games every year. They only missed one summer, and that was because one of them was becoming a new father. After high school graduation in 1960, Marlin stayed at home and attended Southwestern State University in Weatherford, OK, 12 miles from Hydro. He graduated from there in 1964, with a Bachelor’s degree in Business Administration, and promptly joined the Air Force Reserves and trained as a military fireman. After basic training, he went to work as a gas accountant at Mustang Fuel Company in Oklahoma City, OK. He remained with them until the company was sold to a new division of OG&E, Enogex, Inc. and remained with that company until taking early retirement in 2000 after working for the them for 45 years. He did a few years of contract work for a few independent oil and gas agencies, then finally retiring at age 70. He was a confirmed bachelor until 1975, when he was coaxed into the dating scene by a fellow coworker that convinced him that “All work and no play” wasn’t conducive to a healthy lifestyle. It was then that he met his wife of 44 years, Valorie Lene’, along with her 3 children from an earlier marriage, Lisa, Lori and Darryn. He was happy to become a husband and father at the same time, while also soon adding another son, Marty, in November of ’76. By far his favorite role began in 1992, when he became a grandfather and his first granddaughter, Breanna, dubbed him with the name “Poppy” and Valorie became “Nanny”, titles which both of them wore proudly. Marlin was blessed by a total of 11 Grandchildren – including Breanna and Bryan Beaver, Samantha Roberts, Caleb and Cash Lene’, Carson and Morgan Jones, all living in the OKC area; Hannah, Emily, Elizabeth and Wyatt Hancock, all living in New Braunfels, TX. After his retirement Marlin enjoyed visiting his friends at The Greens Country Club, attending numerous sporting events, traveling and simply being with his family. He fought a courageous battle with liver disease (NASH) for 4 years. He refused to give up hope and continued to live a full life much longer than the doctors ever expected. In the end, his body had enough and he chose to join the care of Crossroads Hospice. Finally, surrounded by his family at his bedside, he passed away peacefully at home. Marlin is preceded in death by his parents Curtis and Gail Jones of Hydro, OK. Survivors include his wife, Valorie Wise Jones; 4 children- Marty Jones and wife Cindy, Jon Darryn Lene’ and wife Brenda, Lori Roberts and husband Scott, all residents of the OKC area, and Lisa Hancock and husband Wade residing in New Braunfels, TX; 11 grandchildren, his sister, Claudia Finney Maddalena and her husband Allan of Honolulu, HA, brother-in-law Tom Henderson and wife Cheryl of San Antonio, TX, along with several cousins, nieces, nephews and beloved friends and coworkers. A memorial service to celebrate Marlin's life will be held Saturday, February 22, 2020 at 10:30 A.M. at Crawford Family Funeral Service in Edmond, OK. There will be a memorial visitation held the night before, Friday, February 21, 2020, from 6:00-8:00PM, for those wishing to pay their respects and visit with Marlin's family, at Crawford Family Funeral Service.

Marlin was born on his Uncle's farm, at sunrise, on September 12, 1942, to his parents Curtis and Gail Jones of Hydro, Oklahoma. He was blessed two years later with a loving sister, Claudia, that adored and respected her big brother. He was... View Obituary & Service Information

The family of Marlin Duane Jones created this Life Tributes page to make it easy to share your memories.

Marlin was born on his Uncle&#39;s farm, at sunrise, on September...