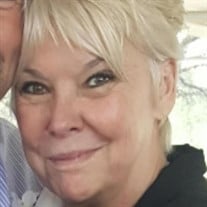 Margaret Brown, 69, of Oklahoma City, ascended into Heaven to be with her Lord Jesus Christ on November 9 after a respiratory illness. She was born on June 3, 1952 in Austria to Arnold and Leopoldine Poechmuller. In 1958, her family immigrated to Lawton, OK to join her aunt Margaret. She graduated from Lawton High School in 1970 and went on to receive her Surgical Tech license. The next chapter of her life was lived in Wichita Falls, TX where she began her career of 30 years at Bethania Hospital. There she assisted in various surgeries with open heart surgery being her favorite. She moved on to Oklahoma City in 1999, when she married the love of her life, Bill Brown, on December 16, 2007. They enjoyed traveling and, as required, she became a fan of OU football games. After 45 years, she "hung up her gloves” and retired! She was a prolific writer with many accomplishments. She won 2nd place in a New Orleans poetry contest in the 1980s. Her children’s book “The Adventures of Mr. Quiggley” was published and is available on Amazon. She is survived by her husband Bill, her mother, Leopoldine, her sisters Mary Hamm (Richard) and Christine McClung, her children, Brian (Brenda), Heather, Mark, Angelia (Deana) Ostyn, Michelle and Vanessa, 12 grandchildren and 2 great-grandchildren, and several nieces, nephews, and cousins. And last but not least, her African Grey parrot, appropriately named Stoops. She was preceded in death by her father Arnold and nephew Michael. She was a member at Chisolm Creek Baptist Church (along with husband Bill) where she served for nearly 10 years as the head chef, including Meals on Wheels. A celebration of her life will be on Saturday, November 13 at 2:00 pm at Chisholm Creek Baptist Church, 17600 Western Ave, Oklahoma City. Flowers can be sent to Crawford Family Funeral at 610 NW 178th Street, Edmond, OK. Online memorials can be made at www.crawfordcares.com.

Margaret Brown, 69, of Oklahoma City, ascended into Heaven to be with her Lord Jesus Christ on November 9 after a respiratory illness. She was born on June 3, 1952 in Austria to Arnold and Leopoldine Poechmuller. In 1958, her family immigrated... View Obituary & Service Information

The family of Margaret Brown created this Life Tributes page to make it easy to share your memories.

Margaret Brown, 69, of Oklahoma City, ascended into Heaven to...

Send flowers to the Brown family.