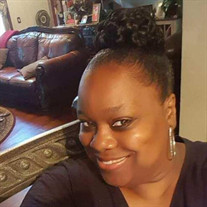 Lynett D. Adams was born August 10, 1969 to the late Willie Mae Hemsley in Lawton, Oklahoma. She departed this life July 10, 2021 in Oklahoma City, Oklahoma at the age of 51. She was the eighth of ten children. She accepted Christ at an early... View Obituary & Service Information

The family of Lynett Adams created this Life Tributes page to make it easy to share your memories.

Send flowers to the Adams family.