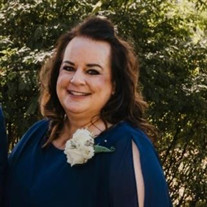 Lisa Dawn Carroll, “Sa”, was born on September 10, 1965 to Jeraldine Henderson Carroll and Joseph Charles Carroll in Edmond, Oklahoma. Lisa went to be with Jesus, at the age of 56, on September 28, 2021. She passed peacefully at OU Medical Center in OKC, OK. She lost a month-long battle with Covid but fought courageously. Growing up she was very active, participating in softball, basketball, and track. She attended Edmond Memorial high school where she cheered. Lisa graduated from Edmond Memorial in 1983. After highschool attended OSU in 1983 where she pledged Chi Omega. She left college to attend school in Chicago to become a flight attendant. After her time as a flight attendant she made a few commercials and then entered the sales world for where she worked at up until her passing. Lisa enjoyed being with family and meeting new people. She would give the shirt off her back to anyone. She lights up every room she walks into, sharing the best stories as if you were there the entire time. Her son, Caleb, was her whole world. They shared a bond that was unbreakable. It was one of Lisa’s proudest moments to witness her son getting married to her now daughter-in law, Makenzie Caldwell. It was the daughter she never had; their relationship was special. Lisa was truly a super Mom; She was a single mother, with the help of , Jeraldine Carroll, her mother who also lived with them. While working full time she somehow managed to be a full time baseball mom. During baseball season you would find Lisa cheering on her son, Caleb, at a game while eating dill pickle sunflower seeds. Lisa’s sister, Lacy Carroll, was her built-in best friend and later they became neighbors raising their children together. After the tragic passing of Lacy in 2009, Lisa created a special bond with her nieces, Morgan Carroll and Macy Carroll, loving them as if they were her own. Though her own son doesn’t have any children yet she was very present in the lives of Myla and Merrik Moore, the children of Morgan Carroll. Lisa will be remembered for always being reliable, kind hearted and adding comfort to the hearts of many. Lisa is survived by her only child Caleb Caldwell and wife Makenzie Caldwell; her Mother, Jeraldine Henderson Carroll; three sisters Lorri Chilcoat, Lindy Keeth, Leigh Ann Carroll Sloan; niece Macy Carroll, niece Morgan Carroll and significant other Adrian and their two children- Myla and Merrik, and a multitude of other nieces and nephews. Lisa was preceded in death by her Dad, Joseph Charles Carroll; her sister, Lacy Carroll. Lisa will be dearly missed. Services will be held on Monday, October 4, 2021 at 3:00pm at Crawford Family Funeral Home in Edmond, OK.

The family of Lisa Dawn Carroll created this Life Tributes page to make it easy to share your memories.

Send flowers to the Carroll family.