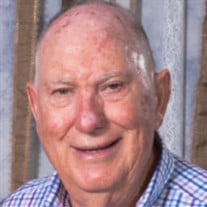 Lewis R. Reynolds, age 83, of Edmond, Oklahoma passed away peacefully on Friday, April 8th, 2022, at home from complications of COVID pneumonia. He was born in Tulsa, Oklahoma on August 16, 1938, to Ernest & Ellen Reynolds. Lewis had three sisters and three brothers. It was later through his sister Sue, that he met and married the love his life, Sharon Miller on April 29, 1960. Lewis proudly served his country in the National Guard and Army from 1956 to 1963. In 1957, he began his career in Dental Supply Sales with Reeve Dental and then later with Patterson Dental in the Tulsa area. One of Lewis’ greatest joys was raising his daughter Dianna and son David. Lewis loved playing all sports, especially golf (where he had a hole-in-one at Kickingbird), bowling (where he bowled a perfect game of 300), softball, and snow skiing; enjoyed coaching his kid’s teams; and also served as a high school referee in both football and basketball with the OSSAA for twenty years. In addition, he was a tri-state Judo champion. Lewis had a great passion for Christ and spent his entire life sharing his faith and serving others in the churches he attended. He was ordained as a deacon in 1972 at Nogales Avenue Baptist Church in Tulsa and later at Southwood Baptist Church, where he enjoyed teaching and mentoring the young married group and serving as a deacon. Lewis was serving as a deacon at Henderson Hills Baptist Church at the time of his passing. He also was able to go on several mission trips with the church which included trips to Malaysia and Wales. In 2007, Lewis retired, and he and Sharon moved to Edmond to be closer to their daughter and son and their families. He treasured spending time with family and going to all of their activities and events. While in retirement, Lewis and Sharon loved traveling and taking cruises with their close friends from Tulsa and with family. Lewis is survived by, Sharon Reynolds, wife of 61 years (they would have celebrated their 62nd anniversary on April 29); daughter: Dianna and her husband Chris Johnson of Oklahoma City, OK; son: David Reynolds and his wife, Janet of Piedmont, OK; grandchildren: Cami McQuerry and husband, Jacob of Edmond, OK, Tori Conceicao and husband, Victor of Oklahoma City, OK, Addison Reynolds of Oklahoma City, OK, Claira Reynolds of Oklahoma City, OK, Chasity Shelton and husband John of Hinton, OK Lex Amburn of Shawnee, OK and Alex Kopp of Oklahoma City, OK and 8 great grandchildren: Marcus Shelton, Graham McQuerry, Sutton McQuerry, Carter Conceicao, Raeleigh Amburn, Cole Conceicao, Paisley Shelton, and Autumn Shelton; brothers: Jimmy Reynolds and wife, Cheryl of Moore, OK, Fred Blakemore of Tulsa, OK; sisters: Sue Richardson and husband Lloyd of Tulsa, OK, Judy Sisler of Tulsa, OK; brother-in-law: Johnny Casillas; and many other loving nieces and nephews. He was preceded in death by his Father Ernest Reynolds; Mother Ellen Evans; step mom Ida Reynolds; sister Judy Casillas; brother Rex Blakemore; and brother-in-law Jim Sisler. The memorial service will be held at Henderson Hills Baptist Church, 1200 E I- 35 Frontage Rd, Edmond, OK on Tuesday, April 19 at 1:00pm.

Lewis R. Reynolds, age 83, of Edmond, Oklahoma passed away peacefully on Friday, April 8th, 2022, at home from complications of COVID pneumonia. He was born in Tulsa, Oklahoma on August 16, 1938, to Ernest & Ellen Reynolds. Lewis had three... View Obituary & Service Information

The family of Lewis R. Reynolds created this Life Tributes page to make it easy to share your memories.

Send flowers to the Reynolds family.