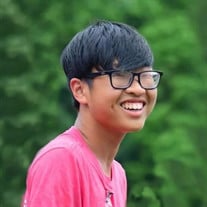 Before Levi had ever breathed his first breath on earth there was a plan for him. He was born in Seoul, Korea but over 6500 miles away his family in Oklahoma anxiously awaited their beautiful boy. He arrived and was placed in their arms in... View Obituary & Service Information

The family of Levi Aaron Dixon created this Life Tributes page to make it easy to share your memories.

Before Levi had ever breathed his first breath on earth there...

Customized sympathy cards. Mailed for you.