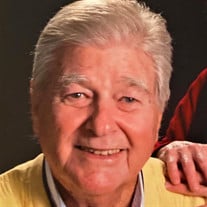 Niles Peterson was born in Dallas, TX on January 20, 1943 and departed this life in Guthrie, OK on July 17, 2020. He attended Dallas schools and graduated from South Oak Cliff high school where he was active in student government and several sports until he was sidelined by an injury in a football game that left him without a spleen. After high school Niles followed in his brothers’ path to Texas A&M University in College Station, TX. Niles loved the music of his day and the great band era of his brothers’ day. He loved to dance. June 8, 1963 Sandra Keeney became his life-long dance partner and their love of dancing was a special part of their life together. Niles’ early career in Dallas was in credit and finance and served him well when he responded to an ad for a credit manager position with a furniture manufacturing company. Niles decided to leave Braniff Airways to accept the position with Oklahoma Manufacturing Company and moved his young family to Guthrie. He loved that the company supported the youth of Guthrie and was proud to work under his mentor, the late Doc Poer, for the well-being of the company, the employees, and the citizens of Guthrie. He especially liked that everyone in Guthrie either worked for Oklahoma Manufacturing Company, had previously worked there, or were related to someone who did. Niles’ love of sports was instrumental in his relationships with his daughters, grandchildren, and many youths in Putnam City and the Guthrie area. He loved teaching game skills and saw coaching as an opportunity to teach life lessons which would endure long after the games were over. Niles followed his fathers’ footsteps by becoming a 32nd degree Scottish Rite Mason which allowed him to become a Shriner March 1, 1998. He was very proud to be a part of a mission to provide the highest quality health care to children in need. He was preceded in death by his parents, Mildred Rebecca Pierce and Joseph Soren Peterson, and three brothers Joseph Soren Jr, Adrian Frank, S. D. (Smokey) Peterson, brother-in-law Stanley Clifford Keeney, and nephew Gregory Rush Peterson. He is survived by his wife, Sandra Keeney Peterson; two daughters, Gwendolyn Paige and Laurie Suzanne; four grandchildren, Lawrence Niles and Dyson Gregory Brackett of Guthrie; Frankie Paige Brackett and Tanner Meredith of Ennis, TX; Jordan Rebecca Elam and husband Mike and children, Kirby Marie and Ryker Soren of Montgomery, TX; sister-in-law Martha Keeney of Grand Saline, TX; nieces and nephews Susie Peterson Dixon and husband Don of Arlington, TX; David Peterson and wife Linda of Arlington, TX; Joseph Soren Peterson, III & Douglas Pierce Peterson of Corpus Christi TX; Jay Byron Peterson and wife Gloria of Houston, TX; Adrian Frank Peterson, Jr of Lewisville, TX; and many more wonderful nieces and nephews. Our special thanks to Niles’ hospice nurses, Amy Ethridge and Allie, for their loving care and to our church family which has supported us on every level. We will all greatly miss Niles’ smile, his positive attitude, his encouragement, his sense of humor, his love of family, his passion for cooking, his willingness to listen, and his strong faith, which will give us comfort and peace until we see him again. Due to the Covid 19 Conoravirus, the family will hold a memorial service at a future date. Memorial contributions may be made in Niles’ name to the First United Presbyterian Church, 102 E. Noble Avenue, Guthrie, Oklahoma 73044.

Niles Peterson was born in Dallas, TX on January 20, 1943 and departed this life in Guthrie, OK on July 17, 2020. He attended Dallas schools and graduated from South Oak Cliff high school where he was active in student government and several... View Obituary & Service Information

The family of Lawrence Niles Peterson created this Life Tributes page to make it easy to share your memories.

Send flowers to the Peterson family.