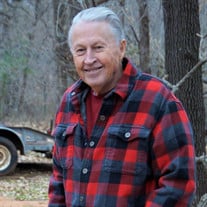 Larry Marks, of Edmond, Oklahoma, went to be with his Lord and Savior on December 3rd, 2020. He was born on October 18th, 1941 in Tulsa, Oklahoma to Marcus and Thelma Marks. The family soon relocated to Edmond, Oklahoma where Larry spent most of his life. As a child, Larry explored outside almost everyday up until nightfall, frequently hunting and trapping all kind of animals. Therefore, this often led to several skunk incidents. After High School, he attended Lippert Court Reporting in Plainview, Texas eventually working his way up to being a Federal Court Reporter. Larry accomplished many things in his career; including being the first Federal Court Reporter to write in Real – Time in Oklahoma and being the author and developer of Win – USR software, utilized to streamline Federal Court Reporter’s transcripts, billing, and dictionaries. In the 70’s, Larry passed the Court Reporter’s National Certificate of Merit the first time it was offered taking all six legs in one setting. The Certificate of Merit Skills were words per minute during Testimony including Q & A, and time allotment to submit final transcript and having an accuracy greater than 95%. Larry was the most well-rounded man with a brilliant mind for being self-taught in the skills of software development. Besides being an award-winning Court Reporter, Larry loved Hunting and Target Shooting, Antique Car and Cushman restoration, Photography, Auto Racing, Antique Farm Implements and Bluegrass Tools, Electronic Gadgets, being a HAM Radio operator, being an avid Bluegrass enthusiast, loved working outdoors, loved his family, and especially loved his Lord. Larry is preceded in death by both of his parents, and one sister, Marsha Vernon. Larry is survived by his wife of more than 50 years, Lynn Marks of Edmond, Oklahoma, children Ladonna Gentz, and spouse Randy of Las Vegas, Nevada, Don Marks and spouse Kristi of Amarillo, Texas, Heather Womack and spouse Scott of Lubbock, Texas, Tyler Marks and spouse Julie of Edmond, Oklahoma, and Courtney Warrington of Edmond, Oklahoma. He also leaves behind grandchildren, Samuel Winstead and spouse Elaine of Washington, Aaron Winstead of Las Vegas, Nevada, Taylor Marks and spouse Eli of Amarillo, Texas, Zoie Hill and spouse Thomas of Amarillo, Texas, Addison Womack, and Landry Womack both of Lubbock, Texas, Riggin Marks and Tucker Marks, both of Edmond, Oklahoma, Christopher Warrington, Drew Warrington, and Darcy Warrington, all of Edmond, Oklahoma, and great – grandchildren, Warner Marks, Rooney Marks, and Stellie Hill, and brother, Jamie Marks and his wife Becky. A service celebrating the life of Larry will be on Saturday, December 5th, 2020 at the Crawford Family Funeral Service Chapel, with burial to proceed to Waterloo Cemetery in Edmond, OK. Memorial donations in the honor of Larry can be made to the Allison +Marks #endalz at 4613 NW 160th Terr. Edmond, OK 73013, or Venmo @Allison-Marks-ENDALZ.

Larry Marks, of Edmond, Oklahoma, went to be with his Lord and Savior on December 3rd, 2020. He was born on October 18th, 1941 in Tulsa, Oklahoma to Marcus and Thelma Marks. The family soon relocated to Edmond, Oklahoma where Larry spent most... View Obituary & Service Information

The family of Larry Marks created this Life Tributes page to make it easy to share your memories.

Larry Marks, of Edmond, Oklahoma, went to be with his Lord and...

Send flowers to the Marks family.