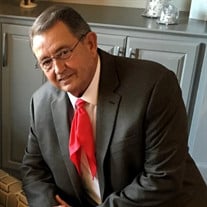 Larry Gene Jones, at age 81, passed from this life on February 19, 2022. Larry was born to Clarence and Myrna (Delay) Jones on December 6, 1940 in Hutchinson, Kansas, and soon after moved to Rolla, Kansas. After his father’s death, he spent many childhood summers and months with his beloved Aunt Lorene and Uncle Ray White in Elkhart, Kansas, where he developed his love for farming and the great outdoors. As a young child, his mother married Clifford Johnson and the family moved to Ponca City where he graduated from Ponca High in 1959. Larry’s upper education included a Bachelor of Science in Industrial Arts Education and a Master of Science, both through Oklahoma State University. Additionally, he attended the General Motors Training Center and achieved his Service Technician Certificate. Other certifications included Oklahoma State Tech, School of Technical Training; Buick Motor Division Air Conditioning Diploma; ConocoPhillips Special recognition; Heart of Zachry Distinguished Safety Award from Conoco Phillips Industrial Services Divisions; and Mechanical Code Training and Development from Pioneer Technology Center in Kay County, Oklahoma. Larry met the love of his life, Jenarold Lee Mullins, at church. They dated throughout high school, enjoying many activities with their youth group at First Church of the Nazarene. They united in marriage September 2, 1961. He began his teaching career at Starr Spencer Schools, followed by Fairfax High School, Canadian Valley Vo-Tech school, and 30 years at Ponca City Schools. Larry ended his teaching career with four years at East High in Wichita, Kansas. He was recognized multiple times as Who’s Who Among American Teachers. While teaching in Ponca City he was also actively involved in ranching, farming and horse training. In addition to his call to education, Larry pursued many other ventures during his lifetime. He was the aircraft refueler superintendent at Conoco Oil which provided him with many enjoyable traveling opportunities. Larry was expert at auto mechanics and found himself in a part-time automotive repair business. He was the community mechanic to friends and family when anyone needed help. At times, there would be several cars lined in the yard for repair, much to his wife’s dismay. His construction experiences included work on the Kaw Dam, the OG&E Sooner Plant, and Conoco Fiber as a pipe fitter. He also attained his Heating & Air Conditioning licenses. Larry was also a proud member of the NRA and was awarded Defender of Freedom in 2019. In his sixties Larry felt a call to formal ministry and was ordained through FCF, Faith Christian Fellowship, in Tulsa, OK. Out of his desire to communicate the love of Christ to all who would listen, he founded Western Evangelism International, Inc. in 2007. This ministry reached many communities and impacted countless lives. He and a team spent many Saturdays riding through neighborhoods meeting families and children, using the horses to encourage response. Western Evangelism was very active with Cowboy Days at the Oklahoma History Museum, giving horse rides to children. He developed cowboy themed ministry tracts to hand out in parades as he rode his horse. He made adventuresome trips to the Baja of Mexico along Highway 1 to distribute Bibles. He also shared the good news of the Gospel in prison ministry for many years. In 2015 he accepted the call to serve as pastor of Bethel Congregational Church in Edmond, where he served for four years. Upon his pastoral retirement he continued ministering to nursing homes, serving as a Chaplain, and as a greeter at Life Church. One of Larry’s greatest joys was teaching his children and grandchildren to love and ride horses. Through the years he bred and trained horses that were featured in National Reigning Association and American Quarter Horse Association. He was at his happiest when he could ride horses in the Colorado Rockies. There were endless trail rides and days spent in the mountains. He spent several summers in Colorado working with children’s horse camps. His love of the mountains was so strong, his request to have his ashes distributed along the Colorado River will be honored. Larry had a jokester personality. He loved to tease and play jokes on the ones he loved. He always had the biggest grin on his face and usually was up to something ornery. He was known as being an avid talker, and therefore he never met a stranger, literally. He would walk into the cowboy coffee shop, sit down at a table knowing no one, and leave with a new friend. Larry is survived by Jenarold Jones, his wife of 61 years, and a beautiful family: daughter Becky and Steve Slothower of Edmond (Kaitlin, Kenzie, Mariah and Rachel); son Dan and Iris Jones of Guthrie (Daniel and Ellen Siquirros and Shantal and Ricky Gutierrez of Denver); daughter Jamie Cessna of Ponca City; daughter Cindy and Jonathan Keathly of Edmond (Anabelle and Kannon); daughter Mindy Cook of Edmond (Cayden and Caylee); and grandson Michael Key of Edmond. He is also survived by his sister, Delynda Baldwin of Oklahoma City; his brother, Terry and Laquita Jones of Mustang, and many nieces and nephews. Donations in Larry’s honor may be forwarded to Bethany Children’s Health Center, 6800 N.W. 39th Expressway, Bethany, OK 73008. Flowers are being received at Crawford Funeral Service in Edmond, Oklahoma.

Larry Gene Jones, at age 81, passed from this life on February 19, 2022. Larry was born to Clarence and Myrna (Delay) Jones on December 6, 1940 in Hutchinson, Kansas, and soon after moved to Rolla, Kansas. After his father&#8217;s death, he... View Obituary & Service Information

The family of Larry Gene Jones created this Life Tributes page to make it easy to share your memories.

Larry Gene Jones, at age 81, passed from this life on February...