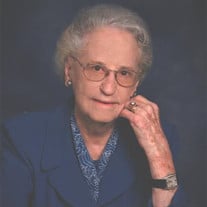 LaFerne B. (Smith) Rosborough Bond was born on October 31, 1923 near Blair, Oklahoma to Gilbert F. and Julia A. Smith. Bert was a finish carpenter and ran a sawmill near Martha. When Ferne was a young girl, the family moved to Konawa, OK, and lived there until Ferne graduated from high school. Upon graduating, she moved to Washington, D.C., and at the age of 17, at the urging of her oldest brother, went to work for the U.S. Navy Bureau of Ships. Near the end of WWII, while on a train trip from Arlington, Virginia to Oklahoma for vacation, she met a young Marine, William "Bill" Rosborough. Several months later, they were married and moved to Evansville, Indiana. In 1951 they moved to Edmond and Bill went to work at Tinker Air Force Base and Ferne at Chet Moore Chevrolet. The opportunity to teach music at a private kindergarten came about, and Ferne went to work as a teaching assistant, a position she held until Bill's death in 1966. One of her proudest accomplishments in kindergarten was accepting a challenge to teach five-year-olds to sing the Star-Spangled Banner. From 1952 until 1972, she was then the organist at First Baptist Church in Edmond, sharing both her vocal and instrumental gifts at numerous weddings and funerals. After Bill's passing, she went to work at what was then Central State University, first in the admissions office, then in the Graduate Office. She also was on the international student advisory board and took on the role of "Mom" to students from many different countries. In the early 70's she met W.C. "Joe" Bond, and in September 1972 they were married and moved to Rush Springs to work in the travel trailer business. She and Joe enjoyed traveling and working together. When Joe retired, they moved back home to Edmond. Joe passed away in 2000, and Ferne lived in the house along with her sister Lorene, then with her beloved dog, Blue. In August 2019, Ferne moved to Arbor House Reminisce in Norman to be near her daughter Debbie and remained there until her passing. She was preceded in death by her parents and two husbands, and by brothers Lloyd Partain and Raymond Partain and sisters Nama Kelly, Gertrude Woodrel, and Lorene Randel. She is survived by her daughter, Deborah Lynn (Debbie) Burchfield and grandchildren Greg Milstead and Melanie Burchfield, plus three step grandchildren. She is also survived by a step-daughter, Marisue Alsobrook of Florida, three more step grandchildren and three step-great grandchildren, as well as nieces and nephews, great nieces and nephews, and long-time friends. Come-and-go visitation for Ferne will be held on Wednesday, November 13, 2019 from 12 p.m. until 8 p.m. with the family to receive friends from 6 p.m. until 8 p.m. Funeral services celebrating the life of Ferne will be held on Thursday, November 14, 2019 at 2 p.m at the Crawford Family Funeral Service Chapel with burial to follow at Gracelawn Cemetery in Edmond.

LaFerne B. (Smith) Rosborough Bond was born on October 31, 1923 near Blair, Oklahoma to Gilbert F. and Julia A. Smith. Bert was a finish carpenter and ran a sawmill near Martha. When Ferne was a young girl, the family moved to Konawa, OK,... View Obituary & Service Information

The family of LaFerne B."Ferne" Bond created this Life Tributes page to make it easy to share your memories.

Send flowers to the Bond family.