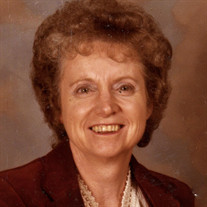 LaFern was born to Jack and Syble Locke on August 22, 1934 on “Campbell Hill” near the Big Springs Community south of Wetumka, OK. She passed from this life on Wednesday, Feb. 6, 2019, in Oklahoma City, OK at the age of 84. She was the oldest of the four siblings: Louie Locke (died in 2002), Delores Walker, and Orval Locke (died 2018). Her maternal grandparents were William and Cassie Campbell from Yell County, AR. Her paternal grandparents were Larkin and Tennessee Locke from Jackson County, AR. LaFern made a profession of faith in Jesus in 1951 and was baptized at Douglas Boulevard Baptist Church near Midwest City, OK. She is currently a member of Quail Springs Baptist in Oklahoma City. She graduated from Midwest City High School in 1953 and immediately went to work as a long distance operator at Southwestern Bell Telephone Company in Oklahoma City. She worked there for 5 years. After several years as a homemaker she returned to work as a Media/Library Assistant for the Oklahoma City Public School System at John Adams Elementary. She retired in 2001 after 28 years. On April 6, 1957, she married Clarence L. Moss at Glenwood Baptist Church in Midwest City, OK. Their children are Lou Ann and Sharon Kay. Lou Ann is married to Mike Moore, and they live in Edmond, OK. Sharon is married to Kerry West, and they live in Dallas, TX. Their Grandchildren are Andrew Moore, Adam Moore, and Austin Moore. Andrew is married to Jessi and their children are Jett, Rori and Ford. Adam is married to Laura and they have one son, Liam, and are expecting their second child very soon. Austin is married to Lanie. Special friends through the years include Rose Lee Self, Gaylene Bozarth Turner, Suzanne Manthe, John and Beverly Tripp, and John and Irma Johnson. She was an avid fan of Thunder Basketball, OU and OSU football, women’s college basketball, and whatever sports the grandchildren or great-grandchildren were playing. She enjoyed reading, sewing, and family scrapbooking. When describing her special memories, she talked about the night she got married, the births of her daughters, the weddings of both daughters, and the births of her grandsons and great-grandchildren. Another memory that stands out especially is the sewing of bridal gowns for both Lou Ann and Sharon. Other exceptional memories include the celebrations of the 50th and 60th wedding anniversaries for her and Clarence. Visitation for Mrs. Moss is being held Sunday February 10, 2019 from 2 to 6pm, with the family being present from 2 to 4PM, and Monday, February 11 from 9am to 8pm. The funeral service will be held on Tuesday February 12, 2019 at 10 am at the Crawford Funeral Service Chapel, 610 NW 178th St. Edmond, OK. Burial to proceed at Ft. Sill National Cemetery in Elgin, OK.

The family of LaFern Locke Moss created this Life Tributes page to make it easy to share your memories.

Send flowers to the Moss family.