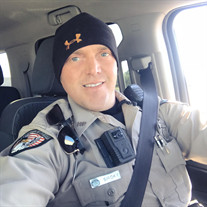 Kodi Don Siroky came down from Heaven to Earth as a beautiful gift and was gently put into the arms of his Mama and Daddy, Brad and Joy Siroky, in Pratt, Kansas on June 28th, 1987 and was placed back in Jesus’ arms on January 14th,2020. He was the most beautiful, bouncing baby boy weighing 8lbs 3oz and from the instant he was born he never stopped moving. He was such a happy baby, always wanting to please everyone. At a very young 13 months, he had a terrible accident where a television fell on him as he tried to stand in the bottom drawer of a dresser to turn on cartoons. He was life flighted to Wichita where we were told he had very little chance of survival. Against all odds he not only survived, but he advanced beyond anyone’s expectations, going on to do everything the Doctors told us he would not do. Kodi lived his life as though there was no tomorrow. At the very young age of 5, his Father owned a Drop zone where Kodi went with him every weekend. At the age of 11, his father, tired of hearing every ride home “Dad I want to jump out of an airplane” so of course without consulting his Mother he began his career of skydiving and went on to have 1000 jumps and begin his Skydiving Videography business, that he enjoyed for many years. He attended Maize High School where he met the Love of his Life, Kimberly at the young age of 15. From the moment he laid eyes on her he knew she was the one for him! They were inseparable from the time they met, never wanting to be apart, Kim went to see her sister in Arizona, not long after they met and between the two of them, Dad had to fly Kodi down to see his beautiful girl because in their words, “We can’t spend another minute apart”. In 2007 they knew their life was meant to be spent together and were married under the eyes of God. Together, they brought three of the most beautiful precious children into this world. Jaxson, Ryder and Gracie were his world. They brought him so much joy and every time he was with his children and his wife, his life was complete. During the early beautiful, adventurous part of their life, Kodi and Kim moved to Liberal, Kansas to start his career in the Oil and Gas Industry. He then realized his love was taking care of people and started to pursue his First Responder Career, where he excelled and thrived and then moved on to become a Volunteer Firefighter for Seward County. He loved serving people and he would help anyone in his path. After moving from Liberal to Wichita, KS, he worked in the Oil and Gas Industry for a short while. His love for helping and serving his country became so strong he applied for the Police Academy. He graduated from the Academy and was hired with the Hutchinson Police Department. He loved his career in Law Enforcement. Kodi’s passion for Law Enforcement was the strongest commitment he made in his life, besides the one to give his life to Jesus Christ by Baptism on January 13th 2019 with his beloved Bride Kimberly. Kodi attended LifeChurch in Edmond, OK. Kodi was a Hero and a Role Model to everyone who met him! Kodi had so much love for his family and friends and lived his life to the fullest until God called him Home. This is not Goodbye; it is See you later. Wait for us at the gates, we won’t be far behind. Kodi was preceded in death by his precious Grandpa, Wesley Siroky and his beautiful Grandma Arthena Brubaker. He is survived by his loving wife Kimberly and his precious children Jaxson Bradley, Ryder Paul and Gracie Dawn. Daddy and Mama, Brad and Joy, Brothers Kole Siroky and daughter Payton, Brandon Siroky and Bryce Siroky. His Sister Brandy and her husband Coby Tresner and their children Connor, Luke and Blake. His Uncle Brian Siroky and wife Terri, Uncle Brent Siroky, Father and Mother in law Paul and Cathy Shaw, Brother in law Richard Payne and wife Claire, Sister in law Lisa Dumdei and husband Chris Dumdei. Uncle Doug and Kathy Brubaker, Cousins, Spencer, Jake Jessica, Jordan, Regina, Rico, Beth Ann, April. Grandparents Raymond Stickler and wife Mary Ann, Donald Brubaker and wife Phyllis, Grandmother Emily Siroky. A funeral service to remember and honor Kodi's life will be held Saturday January 18, 2020 at Crawford Family Funeral Service in Edmond, OK at 9:30AM. Visitation with the family will be held the night before, Friday January 17, 2020 from 6:00PM-8:00PM at Crawford Family Funeral Service in Edmond, OK. In Lieu of flowers the family asks that you please consider making a donation, which will be set aside for Kodi's family. Donations may be sent to Crawford Family Funeral Service (610 NW 178th St. Edmond, OK 73012)

Kodi Don Siroky came down from Heaven to Earth as a beautiful gift and was gently put into the arms of his Mama and Daddy, Brad and Joy Siroky, in Pratt, Kansas on June 28th, 1987 and was placed back in Jesus&#8217; arms on January 14th,2020.... View Obituary & Service Information

The family of Kodi Don Siroky created this Life Tributes page to make it easy to share your memories.

Kodi Don Siroky came down from Heaven to Earth as a beautiful...

Send flowers to the Siroky family.