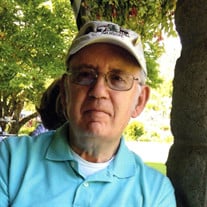 Kenneth G. Summar peacefully entered into heaven with his wife and girls by his side at his home on August 21, 2020. Born on April 17, 1947 in Amarillo, Texas to Melvin and Dorothy (Scott) Summar, he grew up in Fort Smith, Arkansas. He gave his life to Christ at an early age and faithfully served the Lord all his days. Ken graduated from Star Spencer H.S. and played trumpet in the marching band. He attended OSU for one year before enlisting in the Army in 1966, and proudly served his country in Germany during the Vietnam era. Upon his return to Oklahoma, he attended Central State College (UCO) and earned a degree in Accounting. During this time, he met the love of his life, Ruth Ann. They married on May 20, 1972 and made a home together in Edmond for the next 48 years. Ken was so proud of his two girls, Amy and Joy, and being a father and husband was always his top priority. Ken began his career at Kerr-McGee in 1973 and was a loyal, hard-working employee until his retirement in 2004. Ken was also a long time member of Henderson Hills Baptist Church. He enjoyed playing the trumpet in the Orchestra for many years and always enjoyed the annual Christmas productions. He was a deacon, organized blood drives, and chaired the benevolence fund for many years. After retirement, Ken enjoyed traveling and spending time with his family. He especially enjoyed his role as Papa to his grandkids. Ken bravely fought his battle against Parkinson’s disease, and showed grace and strength to the very end. He will be remembered for his sense of humor and his great big heart. Ken is survived by his wife Ruth, brother Richard (Joan) Summar, daughters Amy (Ben) Emmons and Joy (Chris) Cable, and grandchildren, Katy Joyce and Max and Jack Emmons. Ken was welcomed in heaven by his parents and many other family and friends. In remembrance of Ken, enjoy some ice cream, road construction, balance your checkbook, and show love to those around you. Come-and-go visitation for Ken will be held on Wednesday, August 26th, 2020 from 9 a.m. until 8 p.m. with the family to receive friends at a reception from 5 to 7 p.m. at the Crawford Family Funeral Service, 610 NW 178th St. Edmond, OK 73012. Funeral services celebrating the life of Ken will be held on Thursday, August 27th at 2 p.m. at the Henderson Hills Baptist Church, 1200 E I-35 Frontage Rd. Edmond, OK 73034, with burial to follow to Memorial Park Cemetery in Oklahoma City, OK.

Kenneth G. Summar peacefully entered into heaven with his wife and girls by his side at his home on August 21, 2020. Born on April 17, 1947 in Amarillo, Texas to Melvin and Dorothy (Scott) Summar, he grew up in Fort Smith, Arkansas. He gave... View Obituary & Service Information

The family of Kenneth G. "Ken" Summar created this Life Tributes page to make it easy to share your memories.

Kenneth G. Summar peacefully entered into heaven with his wife...

Send flowers to the Summar family.