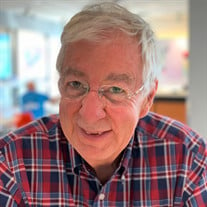 Kenneth “Ken” Eugene Elder, 73, of Oklahoma City, OK, passed away peacefully Wednesday morning, July 14, 2021, at Mercy Hospital, with his loving wife, Joanie, by his side. Ken was born on March 16, 1948, in Wenatchee, WA and was one of four children of Emerson and Georgia Elder. Ken spent most of his early years in Everett, WA where he attended elementary, junior-high, and high school, graduating in 1966. Following high school, Ken continued his education at Washington State University, where he was a member of the Delt Tau Delta Fraternity, and earned his BS in Psychology, in 1970. Ken then enlisted in the United States Air Force in 1970, where he served for four years before being Honorably Discharged. During his time in the Air Force, Ken continued his education at the University of Alaska from 1972-1973, and later at Washington State University from 1974-1977. On October 24, 1987, Ken married the love of his life, Joan Ann Matthews, in San Antonio, TX. Following marriage, Ken furthered his education at the University of Oklahoma, where he obtained his master’s degree in 1999. After graduation Ken continued at the University of Oklahoma Center for Public Management as an esteemed employee. Ken’s work with the Oklahoma University Center for Public Management illustrated his analytical, problem-solving attitude, as well as his ability to always express a positive and even temperament. Whether with co-workers or clients, he knew the importance of focusing on the project at hand and seldom let personal feelings or circumstances interfere with the ultimate objectives. Ken was a bit of a renaissance man who had wide-ranging interests beyond his work as a teacher and curriculum developer. He enjoyed music of many kinds, including a fifteen-year passion for singing barbershop-style music with the Oklahoma City chapter of the Barbershop Harmony Society and with his quartet, The School Bored Four. Quartet members loved his rich bass voice and counted on him to point out the discrepancies of the notes on the page and the sounds being sung. While he was a trombone player in earlier years, he discovered an interest in learning how to play the pan flute after retirement. He admitted to being a sky diving instructor while living in Washington and his honesty would give us no reason to doubt the veracity of that claim. Although he played ping pong for many years, more recently he became an avid pickleball player and began to assemble a collection of pickleball paddles that his friends envied. The many lives he touched will certainly miss the wonderful man we came to know and love. Ken is survived by his loving wife Joan Elder; his sister Marilyn Lindsey, her husband Steve Lindsey, son Bryce Lindsey, wife Erika Lindsey, daughters Lydia, Hannah, and Rachel; his sister Yvonne McCamon, her husband Bob McCamon, daughter Summer McCamon; and his brother Jim Elder, his wife Cindy, Daughters Emily and Anna. Ken is also survived by Joan’s siblings, Judy Dieste, her husband Tony Dieste, son Tony Dieste, wife Stephanie Dieste, son Alex Dieste, daughter, Ashley Dieste, and son Michael Dieste; Susan Lockhart, husband Wayne Alexander, son Tim Lockhart, wife Gaby Lockhart, son Timmy Lockhart, daughter Stephanie Lockhart, daughter Linda Lockhart; daughters, Sarah Younger, Anna Lunceford, (husband Kyle Lunceford), and Mary Younger. A celebration of life for Ken will be held Thursday, July 22, 2021 at 11:00AM at the Crossings Community Church Chapel in Oklahoma City, OK. Military honors will be under the conduction of the United States Air Force. Burial will take place at Memorial Park Cemetery in Oklahoma City, on a later date. Services for Ken will be made available via livestream through Crossings Community Church. Please find the below link, for viewing purposes. https://vimeo.com/577245464/816086b4df

The family of Kenneth Elder created this Life Tributes page to make it easy to share your memories.

Send flowers to the Elder family.