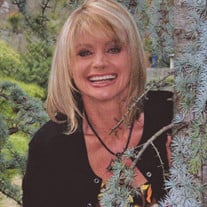 Kelly Zubik-Heitzman, 60, of Oklahoma City, OK, passed away peacefully, Sunday, November 22, 2020, in the comfort of her home, with her husband Gregg by her side. Kelly was born December 21, 1959 in Marlin, TX. In her early years, Kelly grew up in several places throughout the state of Texas, primarily Houston. Kelly attended several universities, furthering her education along the way. Most notably, Southern Nazarene University in Bethany, OK. It was here where she received her BS and MBA in Marketing and Management. Kelly would put her education and degree’s to good use, in an over 22-year career as an award winning Pharmaceutical and Medical Device sales representative. It was during this time that she would meet and later marry, her husband, Gregg Heitzman. Kelly was an adventurous woman. One that could always be found outdoors, working in her garden or landscaping. She was as authentic and genuine as anyone could be, and had the type of smile, laughter, and energy, that was contagious to anyone around her. Kelly was a lover of all animals, especially her 3 puppies, Shay, Sadie, and Sasha. Throughout her life Kelly was a member of many different groups and organizations, some of which include, the Toastmasters Club, Junior League, and the Oklahoma Horticulture Society. Kelly is survived in passing by her husband, Gregg Heitzman; her mother, Marilyn Torgeson; sister, Cassandra Hedgpeth; brother, Frank Zubik; and cousin, who was more like a daughter, Rose Glazener; along with many other family members and friends. Kelly was preceded in passing by her father, Gerald Zubik and grandparents, Jack and Anne Zubik, and Milton and Francis Mallard. The family of Kelly would like to send a special thanks to Dr. Aleda Toma and everyone on her staff for the outstanding care and compassion they provided both Kelly and Gregg. They would also like to thank everyone at Omeros Corporation, especially Randy Balliett and Pam Crosby, for the impact they had on Kelly during their time together, especially through these trying times. In lieu of flowers the family of Kelly asks that you please consider making a donation to Doodle Rock Rescue. A link for donations may be found below. https://doodlerockrescue.org/how-to-help/donate/

Kelly Zubik-Heitzman, 60, of Oklahoma City, OK, passed away peacefully, Sunday, November 22, 2020, in the comfort of her home, with her husband Gregg by her side. Kelly was born December 21, 1959 in Marlin, TX. In her early years, Kelly grew... View Obituary & Service Information

The family of Kelly Heitzman created this Life Tributes page to make it easy to share your memories.

Send flowers to the Heitzman family.