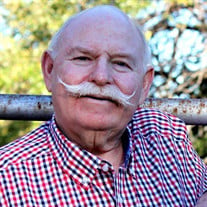 Karey Randall Barnes passed away on November 30, 2020 at the age of 73, after a long battle with cancer and its complications. He was a long time resident of Edmond, Oklahoma. He was born on January 16, 1947 in Oklahoma City, to Herman and Eddie Barnes. He grew up in Britton, Oklahoma. He graduated from John Marshall High School in 1965. GO BEARS! He joined the US Navy in 1966,participating in two campaigns during the Vietnam War Conflict, serving on the USS Lyman K. Swenson DD 729. He was honorably discharged in 1970. Upon returning home he began work for Oklahoma Gas and Electric Company and attended night school at Central State University through the GI Bill. He graduated in 1980 with a marketing degree and continued working in the OG&E Sales and Marketing Department, retiring after a 31 year career. In retirement he worked in various fields as a home builder, indoor air quality controller and home inspector. Karey believed that Britton, Oklahoma was the capital in the world. Many of the friends that he made from Britton Elementary to John Marshall High School remained near and dear to him. Weekly and monthly luncheons and visits kept him connected to his lifelong friends. The years of his youth were filled with happy memories, from sacking groceries at the Humpty Dumpty, to cruising with his friends and hanging out at the Split-T. He was beyond proud of his time in the Navy. He was able to travel the world, seeing some of his favorite places including Japan, China and the Philippines. As a sailor, he made new lifelong friends aboard ship. He loved being a Navy Veteran and attended several reunions of the Lyman K. Swenson crew. He enjoyed his career at OG&E, but even more he loved the friends he had there. He often referred to going to work as “going to the pool hall.” He spent many days and business trips with some of his best friends. None of that held a candle to the love he felt for his family. He married his best friend Jan on February 2, 1973. They would have celebrated 48 years together this February. They started their married life in the Village, raising their first two daughters, eventually building a home in Edmond, while being blessed with the addition of their third daughter. During their 47 year marriage they wrote the rule book for love, support and respect. Their marriage was an inspiration to couples, especially in the last 10 years when Karey leaned on and depended on his faithful partner. He considered his greatest accomplishment in his life to be his three daughters. He spent many days teaching his daughters how to fish, how to cook, and how to change oil and tires. He taught them the value of a strong work ethic. He loved unconditionally giving and receiving without fail. His four granddaughters were the light of his life, bringing him immense joy. He was involved in their lives, taking them to school, on ice cream and donut runs, daily facetime visits, and being a best friend. He never missed an opportunity to teach them a life lesson. While all of this paints a picture of who he was, his true legacy was his faith and walk with Christ. Throughout his illness, he never complained and always had a positive attitude reflecting his reliance on Christ’s love. He is survived by his wife of 47 years, Jan Barnes, daughter Keri Steagall and husband David of Fort Worth, TX, Kim Mula and husband Ryan of Edmond, OK, Katie McCormick and husband Robert of Lakeland, FL. Four granddaughters, Grace Steagall, Lauren Steagall, Laynie Mula, and Mary McCormick. He is also survived by sisters Kay West and husband Jerry and Karen Navarro, both of Edmond, OK. He had many nieces and nephews who he loved as his own. He leaves many cousins and friends as well. Donations may be made in his honor to Lord of Life Lutheran Church, the Non-Hodgkins Lymphoma Society, and the Vietnam Veterans Association of America. There will be a reception Thursday, December 3 from 5-7 at Crawford Funeral Home, 610 NW 178th St, 73012. There will be a graveside service Friday, December 4 at 2pm at Red Hill Cemetery in Hammon, OK.

Karey Randall Barnes passed away on November 30, 2020 at the age of 73, after a long battle with cancer and its complications. He was a long time resident of Edmond, Oklahoma. He was born on January 16, 1947 in Oklahoma City, to Herman and... View Obituary & Service Information

The family of Karey Randall Barnes created this Life Tributes page to make it easy to share your memories.

Send flowers to the Barnes family.