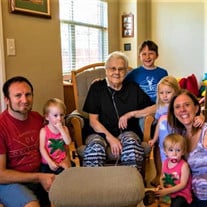 June Hosmer, 86, of Oklahoma City, Oklahoma, died peacefully in her home on Monday, October 5, 2020, surrounded by her family and friends. She is survived by her grandsons Christopher Hosmer and his wife Renee, and Tony Tocci; her great grandchildren Christian Graham, London Kate, Emery Rose and Lilly Page Hosmer; niece Lisa (Hosmer) Kent , her husband Jeff; great nieces Patty Jacobsen, her husband Jed and their children Stevie and Sydney Jacobsen; Lindsay McGee, her husband Kurt and their children Gracie, Ryan, Rebecca, Anna and Kalvin McGee; and her best friend Patti Bilyard. June was born on August 25, 1934 in Massachusetts. She was the daughter of the late Howard and Marion (Angier) Hosmer. She is also preceded in death by her daughter Terilee Hosmer and brothers Richard Hosmer and Donald (DeDe) Hosmer. June worked for Woolworths for many years before retiring. After her daughter died, she moved to Muskogee, Oklahoma with her mother and grandsons. Her favorite past times were volunteering at Hilldale Elementary School in Muskogee, Oklahoma until her health started to decline, going to casinos, working crossword puzzles, watching golf, going to Disney World, coloring and playing cards and board games with her family and friends. She will always be remembered for the way she took in and raised her grandsons, and for doting on her four great grandchildren. For all who knew her, she will be missed for her name calling, East Coast accent, strength, and her do it now and get it done personality. She went by many names, including Gram, Nanny, June Bug and Auntie June. A remembrance of life service will be held at North Pointe Baptist Church, 5300 Coffee Creek Road, Edmond, OK 73025, on Saturday, October 24 at 3:00 PM. Cremation was done under the direction of Crawford Family Funeral and Cremation Service, 610 NW 178th in Edmond, Oklahoma. The service will also be live-streamed for those who cannot attend. In lieu of flowers, donations in memory of June may be made to Hilldale Elementary School for art supplies. 313 E. Peak Blvd., Muskogee, OK 74403.

June Hosmer, 86, of Oklahoma City, Oklahoma, died peacefully in her home on Monday, October 5, 2020, surrounded by her family and friends. She is survived by her grandsons Christopher Hosmer and his wife Renee, and Tony Tocci; her great grandchildren... View Obituary & Service Information

The family of June Hosmer created this Life Tributes page to make it easy to share your memories.

Send flowers to the Hosmer family.