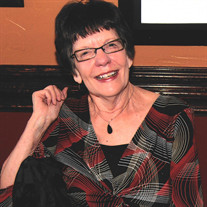 Judith Marie Ruffra, Oklahoma City, OK; April 19, 1935 – December 27, 2018. Judy was born to Albert Ray and Zela Marie Robertson in Midland, TX. She graduated from Central High School in Oklahoma City in 1952 (a year early). She married Chuck Ruffra on August 31, 1957, in the Tinker AFB Catholic Chapel, and they had two children, Michael and Michelle. Judy spent most of her life in Oklahoma City, although she and Chuck were stationed at several bases around the country while he was in the Air Force. She was an excellent and hard-working legal secretary most of her adult life; her grammar and spelling were perfect, which leads to stress on the part of this obituary author. Judy worked full-time while being an excellent wife, mother, cook, homemaker and seamstress. Judy was a devout Catholic and assisted the parishes of St. Eugene’s and St. Monica’s for years in many ways. Judy was preceded in death by her husband, parents, step-father, Johnnie Felts, and her brother Don Robertson. Judy is survived by her brother, Troy Robertson, and his wife Sue of Midland, TX; her sister-in-law Mary Robertson of Midland, TX; and her children Michael Ruffra and his spouse, Tommy Rose of Seattle, WA; Michelle Scott and husband Curtis Scott, and Judy’s cherished grandchildren, Seth and Evelyn Brunner, all of Edmond, OK. Judy suffered from Alzheimer’s disease for many years. The family would like to thank all of those that cared for Judy in her final years and also the dear friends who continued to visit her. The Mass of Christian Burial will be held at St. Monica’s Catholic Church, Edmond, OK, on January 7, 2019, at 10 a.m. The Mass will be followed by burial at St. Patrick’s Cemetery and a lunch in the Parish Hall at St. Monica’s.

The family of Judith M. Ruffra created this Life Tributes page to make it easy to share your memories.

Send flowers to the Ruffra family.