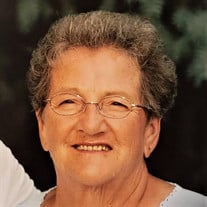 Joyce Ann (Rabehl) Radke was beautifully called home by God on October 10, 2020, to the song of Amazing Grace. She was born July 10, 1936, in Fox Lake, WI, to Harley and Margaret Rabehl. She grew up in Fox Lake with her brothers and sister; graduating from Fox Lake High School in 1955. After high school, Joyce moved to Milwaukee to attend Beautician School. In June, 1957, Joyce married her love, Herbert Radke. In 1960, the couple made their home in Fox Lake and remained there for the continuation of their 61 year marriage. Joyce had worked at the shoe factory, Pierce’s Supermarket, and retired after 20 years from Kolpin Manufacturing, all in Fox Lake. During her lifetime; she was a great wife, the best Mother a child couldn’t even imagine having, a doting and phenomenal Grandmother, an incredibly loving Great-Grandmother, and a beloved sister, aunt, daughter, and friend. She was an amazing baker and homemaker. She enjoyed many, many years of camping, bowling, and playing golf. She always had a great time and danced at every wedding she attended! She had danced many waltzes and polkas. She enjoyed singing, whether at home, at an event, or in the church. She read a library worth of books!! She loved to watch her children and grandchildren play sports; and to watch her favorite team, the Chicago Cubs – especially when they won the World Series in 2016!! She was a member of the American Legion Auxiliary for decades. She was also a lifelong member of St. John’s Evangelical Lutheran Church in Fox Lake. Joyce is survived by her children; son Bart (Steph) Radke of Beaver Dam, WI, son Darren (Laurie) Radke of Marshall, WI, and daughter Beth (Jason) Miller of Oklahoma City, OK; her wonderful grandchildren Bryan (Breanna) Radke of West Allis, WI, Anna Radke of Waukesha, WI, Luke and Jaelie Golden of Beaver Dam, WI, Sean and Alyssa Radke of Marshall, WI, Dan and Caleb Miller of Oklahoma, OK; and her two adorable great-grandchildren Aria Radke of West Allis, and Kashton Hudson of Waukesha; her sister Beverly Walker of Randolph, brothers Roger Rabehl of Las Vegas, NV, Stephen Rabehl of Beaver Dam, and Keith of Beaver Dam, sisters-in-law Joanie Rabehl of West Allis, Donna Radke of Beaver Dam, and Leona Kelm of Watertown, along with cousins, many nieces and nephews, and a multitude of great- and great-great nieces and nephews. She was preceded in death by her husband, Herb; parents Harley and Margaret Rabehl; in laws Sidney and Cecelia Radke; brothers Donald Rabehl and David Rabehl; brothers-in-law LeRoy Radke and Sonny Walker, sisters-in-law Helen Rabehl, Shirley Rabehl, Jan Rabehl, and Sharon Rabehl; niece Wanda Radke, nephew Wayne Walker, among other aunts, uncles, and friends. There will be a visitation starting at 1pm on October 18, 2020, with a service to follow at 2:30pm at St. John’s Ev. Lutheran Church in Fox Lake, with Rev. David Nottling presiding. A small graveside service and burial of Herbert & Joyce’s ashes will be held at Highland Memory Gardens in Beaver Dam following the memorial service. The family is serviced by the Kratz-Smedema Funeral Home in Fox Lake, and the Crawford Funeral Service in Oklahoma City. Due to the coronavirus and subsequent restrictions, the family asks if you are attending the visitation only, please come early so social distancing may be observed for all attendants. Also, if you have any symptoms, or have been exposed to someone with symptoms within the last week, the family asks you would stay home to prevent the spread of the virus. Masks will be required to attend. The family appreciates your understanding and cooperation during this already difficult time.

Joyce Ann (Rabehl) Radke was beautifully called home by God on October 10, 2020, to the song of Amazing Grace. She was born July 10, 1936, in Fox Lake, WI, to Harley and Margaret Rabehl. She grew up in Fox Lake with her brothers and sister;... View Obituary & Service Information

The family of Joyce Radke created this Life Tributes page to make it easy to share your memories.

Send flowers to the Radke family.