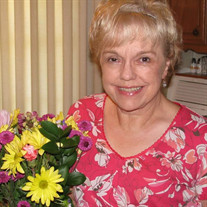 Joyce Batey, 79, beloved Wife, Mother, and Grandmother, was called to her eternal resting place on July 30, 2020. She entered this world on June 6, 1941, in Grove, OK, born to James and Margaret Prather. She grew up in Miami, Oklahoma where she often spent time with her grandmother, Bertha Parker, whom she loved dearly. She was an only child and was close to her mother. You would often hear them laughing together. She eventually moved to El Paso, Texas where, in 1958, she met her future husband, Jerry Yeager. They were married on Valentine's Day, 1959 and together they had 4 children. Her career was as mom and caretaker of her 4 children, which she cherished. Because Jerry served in the Air Force, she lived in many locations throughout their marriage: Ankara, Turkey; Madison, WI; Roswell, NM; Sault Saint Marie, MI; Los Angeles, Philippines; Big Spring, TX; Cheyenne, WY; and Altus, OK, where he retired from the Air Force. Jerry passed away in February 2000 just days before their 41st anniversary. She married her 2nd husband, Chuck Blouin later that year, and they relocated to Oklahoma City, so she could be closer to her children. Their marriage ended in 2010. Soon after, she met her current husband, John, and they were married in May 2011. Joyce had many interests. Spending time with her family was her favorite past-time. Her pet dogs Little Bit, Katie, and Sophie were special to her, and she treated them like family, calling them her babies. She loved watching TV. Her favorite genre of shows were mystery, detective and ghost stories. She also appreciated shows about gardening and house renovations. Her passion was working in her garden and watching her flowers blossom. She also authored many detective stories, but it was a personal hobby and not one she shared openly with others. She was an avid collector of anything owls, Tweety Bird, and earrings. Traveling and shopping (especially at every Wal-Mart in each town she'd visit) was something she enjoyed immensely and would participate in whenever she could! She is survived by her husband John Batey; son Gary Yeager and his wife Candice, son Steve Yeager and his wife April, son Dan Yeager and his wife Myloe, daughter Kia Yeager, 15 grandchildren, 3 step-grandchildren, and 4 great-grandchildren. She was preceded in death by her parents and first husband Jerry Yeager. Services to remember and celebrate Joyce's life will be held Friday, August 7, 2020 at 3:00PM at Crawford Family Funeral Service in Edmond, OK. Visitation will be held the night prior, Thursday, August 6, 2020 from 6:00PM-8:00PM at Crawford Family Funeral Service. A private family burial will take place following services at Altus City Cemetery in Altus, OK.

Joyce Batey, 79, beloved Wife, Mother, and Grandmother, was called to her eternal resting place on July 30, 2020. She entered this world on June 6, 1941, in Grove, OK, born to James and Margaret Prather. She grew up in Miami, Oklahoma where... View Obituary & Service Information

The family of Joyce Batey created this Life Tributes page to make it easy to share your memories.

Send flowers to the Batey family.