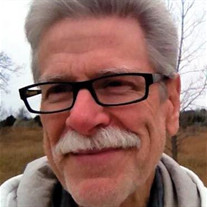 Jon Allan Dickey, 73, graduated to his heavenly mansion on November 29, 2018 surrounded by his loving family. He was born in Stillwater, Oklahoma on January 25, 1945 to Warren Dickey and Lillian (Leftwich) Dickey. Jon graduated from C.E. Donart Stillwater, OK in 1964. He worked at Bates Brothers, then joined the Air Force in 1965. After attending tech school at Keesler AFB to learn about Radio Relay Microwave RPR, he transferred to Clark AFB in the Philippines as Sgt. Jon Dickey, in the 1961st Comm Group top-secret/crypto. In 1967 Jon transferred to McClellan AFB in Sac, CA. There, in 1968, he met and married Geraldine Zadik. They married for eleven years and had one daughter, Lydia Michael Camp (Dickey). After being honorably discharged from the Air Force in 1971, Jon attended Oklahoma State University where he obtained a Bachelor of Fine Arts in 1974. Jon’s beloved daughter was born in 1976, the same year he began working at Career Tech. In 1980, Jon was hired by OSU as a Graphic Design/Illustrator Artist for Ag Communications. Later he became the Coordinator of Graphics, where he worked until retirement in 2003. In addition to his professional career, Jon was an amazing artist; a fact he humbly kept to himself. He worked in several media, including oils, acrylics, intaglio, pen and ink, and pencil. He received first place in graphics in the 33rd Oklahoma Artists Annual Exhibition and has exhibited in Europe as well as the United States. His works are in the permanent collections of the Philbrook Art Center, the Tulsa city-county library, and OSU’s Gardiner Gallery, as well as in many private collections. Besides art, Jon had more important passions. What he would want you to know most about him, was that he was a Dad, a JonPa, a Brother, an Uncle and a son of the Most High God. He trusted Jesus (Yeshua) with his whole heart and desired all to know Him. He loved and cherished God’s word, and all His promises and longed for the day he would be united with the Father in heaven. He is preceded in death by his dad, mother, brothers Robert and James, his first-born son, and nephew, Jon. He is survived by sisters: Maria Kress (Michael), Carol Finch (Henry); brother Daniel (Mary), daughter Lydia Camp (Caleb), two grandsons: Silas and Hudson; Nieces: Tiana, Tiffany, Bri; Nephews: Sean, Jacob, Jeff, Jason, Ryan; and as well as great nieces and nephews. Visitation will be held at Strode Funeral Home, Stillwater, OK on Tuesday December 4 from 12-8pm. Services will be held at University Heights Baptist Church, 323 S. Knoblock, Stillwater, OK on Wednesday, December 5 at 12pm. In lieu of flowers, donations can be made on Jon’s behalf to one of the following charities which were dear to his heart: Chosen People Ministries, Adrian Roger’s Ministry – LWF, or Caleb and Lydia Camp’s ministry World Outreach Ministries #164.

Jon Allan Dickey, 73, graduated to his heavenly mansion on November 29, 2018 surrounded by his loving family. He was born in Stillwater, Oklahoma on January 25, 1945 to Warren Dickey and Lillian (Leftwich) Dickey. Jon graduated from C.E.... View Obituary & Service Information

The family of Jon Allan Dickey created this Life Tributes page to make it easy to share your memories.

Jon Allan Dickey, 73, graduated to his heavenly mansion on November...

Send flowers to the Dickey family.