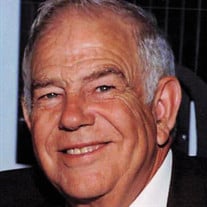 Our beloved John Milton Williams of Edmond, Oklahoma passed away peacefully in his sleep Saturday, April 4, 2020 at the age of 83 with his wife Barbara and oldest son Jeff by his side. John was born in Sand Springs, Oklahoma on February 5, 1937 to Robert Milton and Pearl Josephine (Bardo) Williams; the fourth of eight children. John graduated from Sand Springs High School in 1955 and enlisted in the United States Air Force in 1957. He married his hometown sweetheart Barbara Davis in Sand Springs in 1958 and they relocated to Salina, Kansas where he was stationed and served as an instructor (Physiological Training Specialist) training pilots in the altitude chamber. In 1959, John was transferred to Lincoln, Nebraska. Two years later their first son, Jeffrey, was born followed by David in 1963 and Robert in 1965. Their fourth son, Mark, was born in Omaha after the family moved to Omaha, due to the facility closure in Lincoln. In 1970, John applied for and was selected into the first USAF Physician Assistant program and the family moved to Wichita Falls, Texas for the classroom portion of the training. Upon graduation, the family relocated to Colorado Springs, Colorado where John served his internship at the US Air Force Academy Hospital. John became a graduate of University of Nebraska when they accredited the Air Force program. Finally, the family settled with John’s first assignment at Tinker Air Force Base hospital in Oklahoma City, Oklahoma. There he worked as a Physician Assistant until his retirement in 1985. John enjoyed coaching little league baseball both in Del City where they lived and also while he was stationed in Turkey. He was also involved in the Boy Scouts with his sons. He loved tent camping with his family in state and national parks. After retiring from the US Air Force, John continued caring for people as a PA. He worked two years alongside Dr. Demas in southwest OKC before serving as a Physician Assistant at the Veterans Administration Hospital in Oklahoma City where he worked until his retirement in 1999. Following retirement John and Barbara enjoyed spending time with their grandchildren, family, and friends. Always together, they relished their time gardening, bicycling, hiking, playing bridge and pinochle, and traveling. Left to cherish his memory are his wife Barbara, their sons and daughter-in-laws, Jeff and Regan, in Jones, OK, and Mark and Anna, in Park City, UT, sons, Dave, in O’Fallon, Illinois and Rob in Munich, Germany, grandsons, Jeffrey and Zane, and granddaughters Sara, Nina, Sofia, Marissa, Trelany, Kelsey Hails & her husband Sean, Taylor Bollinger & her husband Andrew, and two great-granddaughters Presley and Valerie Bollinger. In addition John is survived by his brothers Raymond and David & his wife Kathy, sister Mary Knabe & her husband Ron, and sister-in-law Jeanette as well as numerous extended family members. John was a loving husband to Barbara for over 60 years. He was a hard worker and passed his work ethic and love of country to his children, two of which followed his path into military service and retirement. John treasured his family, and his eyes would twinkle when he would play cards with his grandchildren or travel with his beloved wife. He enjoyed working in his garden and could fix most anything around the house. John will be sorely missed by his family and friends. Services to remember and celebrate John's life will be held at Crawford Family Funeral Service in Edmond, OK, on Monday, June 8, 2020 at 11:00AM.

Our beloved John Milton Williams of Edmond, Oklahoma passed away peacefully in his sleep Saturday, April 4, 2020 at the age of 83 with his wife Barbara and oldest son Jeff by his side. John was born in Sand Springs, Oklahoma on February 5, 1937... View Obituary & Service Information

The family of John Williams created this Life Tributes page to make it easy to share your memories.

Our beloved John Milton Williams of Edmond, Oklahoma passed away...

Send flowers to the Williams family.