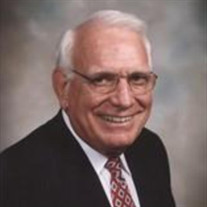 A service honoring the life of Dr. John W. Weatherford will be at 10am on Saturday, December 19th at Crawford Family Funeral Service, Edmond with the service being Live Streamed through this site. Burial will follow at Memorial Park Cemetery in Oklahoma City. Dr. John Wilson “J.W.” Weatherford—a devout man of faith, loving husband and father, and lifelong educator, of Edmond, Oklahoma—passed away on December 15, 2020. He was born in Pauls Valley, OK to Troy & Eva Weatherford on August 18, 1936. As a Pauls Valley Panther, J.W. played football, and was a member of Distributive Education Clubs of America. There, he met his high school sweetheart and wife of 66 years, Barbara. J.W. lived every day for Christ. He was an active member and served as a deacon of Edmond’s First Baptist Church. Family always came first for J.W. No father could have been more proud to watch his son officiate NFL games near and far, and share his love of education with his daughter throughout her own teaching career. He knew that good food could bring family together. He could tell you where to find the sweetest cinnamon rolls, the best burger in town or how to “doctor up” a pot of beans to his liking. He loved family cookouts, tossing around the football with his grandkids, and finding any way to make you laugh. J.W. earned a bachelor’s degree from East Central State University, a master’s degree from Oklahoma State University and a PhD from THE Ohio State University. He touched the lives of so many throughout his career in education, earning him an honorary lifetime membership in DECA and an induction into the Career Tech Hall of Fame. Weatherford retired from the University of Central Oklahoma in 1999 after working for the university for 27 years. J.W. was preceded in death by his wife, Barbara; daughter, Diana Roberts; son-in-law, Richard Roberts; brother, Leroy Weatherford; and parents. He is survived by his brother, Clovis Weatherford and wife Millie; son, Mike Weatherford and wife, Stephanie; daughter-in-law Lynn Weatherford; grandchildren: Megan Roberts, Daniel Roberts and wife Shelby, Rachel Branch and husband Chad, Drew Weatherford and wife Haley, Jake Weatherford and wife Shelbie; 4 great-grandchildren, as well as nieces and nephews. The family would like to express our heartfelt thanks to the Touchmark staff for their love, care and support throughout J.W.’s final years. Come-and-go viewing and visitation will be 9 a.m. - 8 p.m. on Friday, December 18th at Crawford Family Funeral Service in Edmond. For those that wish to attend, a memorial service will be held at 10 a.m. on Saturday at Crawford Funeral Service with burial following at Memorial Park Cemetery in Oklahoma City. The service will be Live Streamed on his tribute page at CrawfordFuneralService.com. In lieu of flowers, memorial donations may be made to the J.W. Weatherford Scholarship Fund at the UCO Foundation. Donations may be made by to the scholarship fund by going to: http://www.centralconnection.org/weatherford

A service honoring the life of Dr. John W. Weatherford will be at 10am on Saturday, December 19th at Crawford Family Funeral Service, Edmond with the service being Live Streamed through this site. Burial will follow at Memorial Park Cemetery... View Obituary & Service Information

The family of Dr. John Wilson "J.W." Weatherford created this Life Tributes page to make it easy to share your memories.

A service honoring the life of Dr. John W. Weatherford will be...

Send flowers to the Weatherford family.