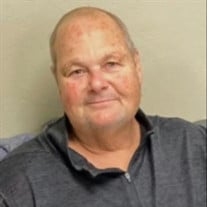 John Michael Swansberger was known as a selfless man, who loved his family dearly and helping those in need. He had a heart of gold and was always looking for ways to help people. He was a “Friend of Bill W.” He attended the Early Birds at the Western Club in Oklahoma City, completing 30 years of sobriety. John served many roles during his time with the Early Birds group, including being a mentor, sponsor and most importantly, a friend. Many people looked up to John for strength during their difficult time, and he helped many people with their journey of sobriety. John was born on March 3, 1953 in Oklahoma City, OK to Lawrence and Elizabeth (Schwarz) Swansberger. John grew up in Oklahoma City, graduating from NW Classen High School in 1971. He went on to attend the University of Central Oklahoma for a short period of time. John left school to pursue his career in HVAC air filtration. He was well known around the filter business, and people enjoyed working with John because he was honest, hardworking, and reliable. He had his own business for a few years, and worked for Engineered Equipment Inc. for the last 15 years. John’s customers were loyal to him and followed him throughout his career from company to company. One of the things John enjoyed the most was cooking out and barbecuing for his customers and family. He would have an annual BBQ and loved smoking meat for them. John also enjoyed hunting and fishing in his younger years. It was at UCO where he met a beautiful young lady, Debbie Watson, and like most people say, the rest is history. They were united in marriage on November 10, 1973. They were blessed with their pride and joy, Jenine, in 1979. John loved and adored his daughter very much and enjoyed spending time with her. They shared many great memories together and had a very special bond. John is survived by his wife of 47 years, Deborah Swansberger, daughter Jenine Swansberger, as well as numerous extended family and friends. He is preceded in death by his parents and sister, Mary Ann Swansberger. We are highly encouraging mask to be worn and practice social distancing. Come-and-go visitation for John will be held on Monday, January 4, 2021 from 1 p.m. until 8 p.m. with the family to receive friends at a reception from 6 p.m. until 8 pm. at Crawford Funeral Service, 610 NW 178th St. Edmond, OK 73012. Services celebrating the life of John will be held at 2 p.m. on Tuesday, January 5th at the funeral home chapel with burial to proceed to Memorial Park Cemetery in Oklahoma City, OK. If you are not able to attend in person, you are able to watch the Live Stream of the service here on our webpage. The Live Stream will launch on Tuesday 10 minutes prior to the service.

John Michael Swansberger was known as a selfless man, who loved his family dearly and helping those in need. He had a heart of gold and was always looking for ways to help people. He was a &#8220;Friend of Bill W.&#8221; He attended the Early... View Obituary & Service Information

The family of John Michael Swansberger created this Life Tributes page to make it easy to share your memories.

John Michael Swansberger was known as a selfless man, who loved...

Send flowers to the Swansberger family.