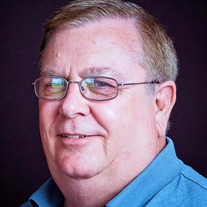 John Lynn Shaw was born in Oakland,CA on October 28th, 1950 to John Bryant Shaw and Eva Bell (Bratcher). He was known to many family and friends as Lynn or Johnny Lynn while growing up. While the family moved back to Oklahoma they moved around to several places within the state before finally settling in Norman when John was in Third Grade. He graduated from Norman High School in 1968 and would continue to live in and around the town until the summer of 1989 when he and wife Shirley moved to Tulsa where they continued to live until retirement in 2015, then they moved to Edmond, Oklahoma. John and Shirley were married August 5, 1983 and had 1 son together. They were able to blend their families together and had 5 kids, 10 grand kids, and 11 great-grandchildren. Papaw always had room next to him for the kids to sit and loved watching any of his kids and grandkids play sports. He loved traveling and was able to visit all 50 states, Cuba, Canada, and even China while on business. He loved spending winters in south Texas and walking on the beach with Shirley. Professionally, he was a well respected Quality Control Manager who worked in Aviation for many years, until retirement came calling. Growing up in Norman he cultivated a love for the University of Oklahoma Football. He was a 23 year season ticket holder and never failed to let you know orange was an ugly color, no matter what shade. He also loved NASCAR and was a big fan of Dale Earnardt and his son Dale Jr. He was able to go to many race tracks around the country including Daytona, Talladega, Bristol, Indianapolis, and Texas Motor Speedway amongst others. John is survived by his wife of 37 years (Shirley), Children - Bobby Acree (Stephanie), Leanna Keathley (Joe), Erica Neal (Randy), Travis Shaw, Johnny Shaw (Shawna) and his grandkids - Michael Acree (Kym), Michael Dickens (Paige), Brett Keathley (Katy), Shane Keathley, Cole Keathley, Lacie Neal (Austin House), Chasity Ruberg (Robby), Kristine Neal, Preslie Shaw, John H. Shaw and 11 Great Grandchildren. He is preceded in death by his parents John and Eva Shaw, sister Doris Shepard, and brother Charles Shaw. In lieu of flowers, please consider a donation to St. Jude Children Research Hospital. A link for donations may be found below. https://www.stjude.org/donate/donate-to-st-jude.html A memorial service to remember and celebrate John's life will be held Friday, December 18, 2020 at 2:00PM at Crawford Family Funeral Service in Edmond, OK. Services will be made available via livestream here on John's tribute page, just prior to services beginning.

John Lynn Shaw was born in Oakland,CA on October 28th, 1950 to John Bryant Shaw and Eva Bell (Bratcher). He was known to many family and friends as Lynn or Johnny Lynn while growing up. While the family moved back to Oklahoma they moved around... View Obituary & Service Information

The family of John Shaw created this Life Tributes page to make it easy to share your memories.

Send flowers to the Shaw family.