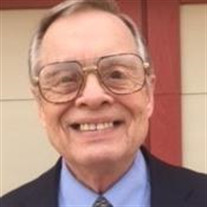 John Clement (Clem) Burdick III was born on Nov 2, 1942 in Union City, TN to John (Jack) Clement Burdick, Jr. and Lucille (Lassiter) Burdick. He passed from this life on Thursday Dec 12, 2019 at the age of 77, after an extended illness. He lived... View Obituary & Service Information

The family of John Clement (Clem) Burdick III, Ph.D., P.E. created this Life Tributes page to make it easy to share your memories.