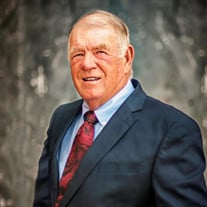 John Merrill Blair, 75, passed from this life to the next on December 13, 2021. He was born to Merrill and Wilma Blair on May 2, 1946 in Edmond, OK. Being the oldest of six children and growing up on the farm taught John the importance of hard work and created a dependence on the Lord that continued throughout his life. He was a hard worker who loved people and lived a life of steadfast faith. John graduated from Deer Creek High School in 1964 and from Central State University in 1968. He was an avid reader and loved learning. He married the love of his life, Marilyn Wade on August 31, 1968. They raised four children together on their family farm where John and his brother Larry raised cattle, sprigged Bermuda grass, sold hay, and harvested wheat and other crops. John began teaching math at Eisenhower Junior High School in Oklahoma City and later taught at Cashion High School for 19 years as a math teacher and coach. John loved to referee basketball games. He also coached boys and girls junior high basketball and baseball at Cashion where he taught his students the love of the game. He loved his students and players, was always fair with a calming presence, and was compassionate while making a positive impact on their lives. John loved to sing, and his booming voice served him well in life. His love for singing came from his parents and siblings who would always sing together at church or at home around the piano. They did this throughout the year and especially at Christmas. He was the music director at Cashion Baptist Church, Noble Avenue Baptist Church, and later at Lone Star Baptist Church. He loved to sing in the church choir and was always willing to sing a solo at church or for friend’s weddings. He passed his love for music to his children and to others whom he had led in children’s choir at church. John never met a stranger. He loved people, and the twinkle in his blue eyes drew them in for some great conversations about some of his favorite subjects – the Lord, his family, sports, life on the farm, travel, and exploring many eating establishments! John was preceded in death by his parents, Merrill and Wilma Blair. John is survived by his wife of 53 years, Marilyn, his four children: David (Shelley), Sheri Wagner (Shane), Eric (Christy) and Brian (Rachel), his 14 grandchildren: Taylor, Hayden, Hannah, Tanner, Sydney, Sam, Lilyana, Lylah, Zoe, Chloe, Callie, and Brody Blair, Coleman and Creed Wagner, and one great-granddaughter Violet. He is also survived by his younger siblings Ruth Stewart, Naomi Minton, Lois Blair, Larry Blair and Martha Blair. A visitation will be held Tuesday evening from 6:00 - 8:00 p.m. at Crawford Family Funeral Centers in Edmond. A celebration of his life will be on Wednesday, December 22 at 2:00 p.m. at Quail Springs Baptist Church in Oklahoma City. Though we are heartbroken in our loss, we rejoice in knowing that he is resting in the arms of his Savior, Jesus Christ in whom he put his faith as a young child.

John Merrill Blair, 75, passed from this life to the next on December 13, 2021. He was born to Merrill and Wilma Blair on May 2, 1946 in Edmond, OK. Being the oldest of six children and growing up on the farm taught John the importance of hard... View Obituary & Service Information

The family of John Merrill Blair created this Life Tributes page to make it easy to share your memories.

John Merrill Blair, 75, passed from this life to the next on...

Send flowers to the Blair family.