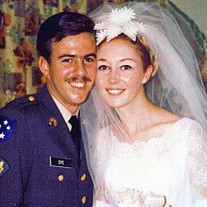 Joan Estelle Dye passed away on , Saturday, December 19, 2020 at the age of 68. Born on March 31st, 1952 in Odessa, TX, Joan would eventually marry her Army sweetheart Ronald Wayne Dye in Odessa on October 4, 1969. Married for over 50 years, Joan and Ron built a wonderful family and future eventually settling in Edmond, Oklahoma for the past 40+ years. They poured their heart and soul into raising two boys in Edmond. Ronald Wayne Dye Jr. was born December 12, 1970 and until his passing in 2019, he provided constant joy and entertainment to his parents and those around him. Younger son Chris Dye was born July 6, 1979 and currently lives and is raising his family in Washington state. Joan was one of the toughest and most determined people. The one word that was used consistently to describe her was “feisty”. She left a lasting impression with strangers, friends and family alike. She embraced and lived the role of Matriarch, acting as a guardian and protector to anyone in need. Her and Ron both displayed tremendous generosity and a loving and kind spirit to all those around. And even through recent health struggles, she displayed a fight and spirit, continuously surprising everyone (especially the doctors) with her toughness and determination. She has earned a much deserved rest and is finally at peace. Joan is survived by her husband Ronald Dye; son, Chris Dye; Brother, Mike Dobson; Grandchildren, Phoenix, Britany, AJ, and Ellie; and Great-grandchildren Caden, Bayleigh, Demi and Thomas. A time to celebrate her life is scheduled as a come-and-go event from 2-4pm on Wednesday, December 30th at Crawford Funeral Service in Edmond.

Joan Estelle Dye passed away on , Saturday, December 19, 2020 at the age of 68. Born on March 31st, 1952 in Odessa, TX, Joan would eventually marry her Army sweetheart Ronald Wayne Dye in Odessa on October 4, 1969. Married for over 50 years,... View Obituary & Service Information

The family of Joan "Samantha" Dye created this Life Tributes page to make it easy to share your memories.

Send flowers to the Dye family.