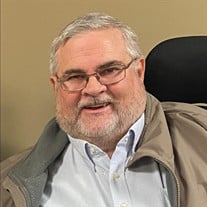 A come-and-go viewing for Jim will be from 3-8pm on Wednesday, March 9th at Crawford Funeral Service in Edmond. A service honoring his life will be at 10am on Thursday, March 10th at Edmond First Nazarene Church. A graveside burial will be at 11am on Saturday, March 12th at South Persimmon Cemetery north of Vici, OK. Jimmy Lee Young was born June 4, 1960, in Woodward, OK, to Willis Edward and Evelyn Pauline McDonald Young. He died March 5, 2022, in Oklahoma City. Jimmy grew up in Vici and graduated from Vici Schools. Jimmy would go on to graduate Summa Cum Laude from the University of Central Oklahoma with a Bachelor of Science degree in accounting as well as his CPA. He married his true love, Kathy, on October 4, 1979, in Vici, OK. Jimmy worked in accounting in the oil & gas industry with Kerr McGee for 20 years and Noble Energy for 8 years. Jimmy was renaissance man at heart. His hobbies and passions varied and were many. He loved hunting, woodwork, building models and collecting guns. He was also known for his canning abilities, gardening, cooking, and baking. He was quite competitive when he’d strike up a friendly game of dominoes, cards, chess, or wahoo. Jimmy had a soft spot for his dogs, Bella & Ritter. It was arguable, however, that there was no greater passion than that he had for his family. He treasured all the time he spent with his kids and grandkids. Jimmy had a heart to serve as well. He served on the board of his church, First Nazarene Church of Edmond and served as the bookkeeper for the church daycare. He never forgot a birthday or other significant dates. Jimmy was preceded in death by his parents; a nephew, Michael Carter; and his beloved dog, Annie. He is survived by his wife, Kathy Young; sons, Jason Young and Cody Young; daughters, Ashley Silcox and Chelsea Huffman; and grandchildren, Landon Silcox, Kyson Huffman, Cobi Young, Jennings Young, Reynolds Young, Kendall Huffman, Connor Young, Hadley Young, Beckett Silcox, and Hayes Young. He will also be missed by 3 sisters, 3 brothers, and a host of nieces and nephews. Jimmy had many memorable quotes including one to ponder, “The one who says it can not be done should never interrupt the one who is doing it.” A service honoring Jimmy’s life will be at 10am on Thursday, March 10, 2022, at First Nazarene Church of Edmond. A graveside burial will be at 11am on Saturday, March 12, 2022, at South Persimmon Cemetery near Sharon, OK. Memorial donations may be made in Jimmy’s name to Wounded Veterans of Oklahoma.

A come-and-go viewing for Jim will be from 3-8pm on Wednesday, March 9th at Crawford Funeral Service in Edmond. A service honoring his life will be at 10am on Thursday, March 10th at Edmond First Nazarene Church. A graveside burial will be at... View Obituary & Service Information

The family of Jimmy Lee Young created this Life Tributes page to make it easy to share your memories.

A come-and-go viewing for Jim will be from 3-8pm on Wednesday,...

Send flowers to the Young family.