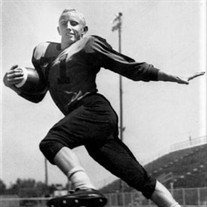 Earnest James (“Jimmy”) Carpenter passed into the arms of his Lord Jesus Christ peacefully on Friday, December 4, 2020 after a brief unexpected illness. He was born on December 1, 1938 in Abilene, Texas to parents Winfred Gid Carpenter and Emma Clarise (Thornton) Carpenter. He graduated from Abilene High School in 1957 and earned his degree in Petroleum Land Management from The University of Oklahoma with honors in 1962. Jimmy was a 5-8, 165 pound running back and safety on Chuck Moser’s Abilene Eagle teams that won 49 consecutive games and three straight state titles from 1954-56. He scored 25 touchdowns his senior year and averaged 10.2 yards per carry. He was inducted in the Texas Football Hall of Fame in 2000 and the Big Country Hall of Fame in 2013. He was also a three-time all-state baseball player for the Abilene teams that won the state championship in 1955 and 1956. He was offered several athletic scholarships including SMU and Rice, but chose OU. At the University of Oklahoma, he lettered three times in football and twice in baseball. In the summer of 1961, he met his future wife and lifetime partner while he and his friend and OU teammate Leon Cross were working for her uncle, Art Wood, in North Lake Tahoe, NV. He married Mary Rebecca McCourry on February 16, 1962 and after graduation from OU, they moved to Billings, MT where Jimmy was employed as a land man with Pan American Petroleum company, later AMOCO. They would later live in Casper, Wy, Denver, Co, Midland and Houston, TX. In 1974 Jimmy and Mary moved to Edmond OK to work for Walter Duncan and after two years he established his own land management and consulting company. He is survived, by his wife, Mary of Edmond, OK, daughter, Courtney (Mark) Lewallen, Kingwood, TX, sister Sandy (Buddy) Meyer Abilene TX, grandsons Zach (Megan) Lewallen, Smyrna, GA, Ford Lewallen, Fayetteville, AR, Caleb (Rana) Lewallen, Northlake, TX, and granddaughter, Rebecca (Rafael) Costa, Pearl, MS, two un-named great grandchildren on their way and many nieces and their families. He was predeceased by his parents, son, James Murray Carpenter and sister, Vernoghn Strole. Jimmy talked often and was particularly fond of his maternal grandfather, James Murray Thornton, and his grandmother Thornton, “Mammy”, who helped raise him while his father was serving in World War II. He was a member of American Association of Professional Land Men and the Oklahoma City Association of Petroleum Land Men. He was active in the OU Alumni Association and traveled many times to Abilene to attend Abilene “Warbird” events and inductions. He was an OU football ticket holder since his graduation and attended games until the last few years when he then shared his seats each year with his longtime friend Joe Chronister. In lieu of flowers please consider a donation to the Oklahoma Humane Society, Oklahoma City or Boys Ranch Town (BRT) Edmond OK. Interment in Abilene TX with a private family service at a later date.

Earnest James (&#8220;Jimmy&#8221;) Carpenter passed into the arms of his Lord Jesus Christ peacefully on Friday, December 4, 2020 after a brief unexpected illness. He was born on December 1, 1938 in Abilene, Texas to parents Winfred Gid Carpenter... View Obituary & Service Information

The family of Jimmy Carpenter created this Life Tributes page to make it easy to share your memories.

Earnest James (“Jimmy”) Carpenter passed into the arms of his...

Send flowers to the Carpenter family.