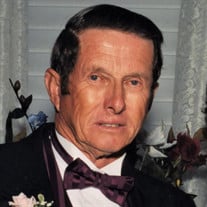 Jimmie Wayne Geis, age 80, passed away on January 3, 2021 at Storey Oaks Memory Care Facility in Oklahoma City, OK of Alzheimer’s Disease. He was born on December 12th, 1940 in Hobart, OK to Roy and Helen Geis. The third of four children, he was raised on a farm just outside of Gotebo, OK until the family moved to town in the 1950s. He was a member of the First Baptist Church of Gotebo. As a boy, he hunted rabbits on the farm areas around Gotebo with his friends; helped his dad with the farming, picked cotton, and attended school until his graduation in 1959. During his sophomore year, he was vice-president of his class. When he was a junior, he was on the land-judging team and participated in the National Land Judging Contest held in Oklahoma City. As a senior, he was a member of the 1958 Gotebo Boys Baseball State Championship team. After graduation, he worked at odd jobs and hauled cattle and hogs for area ranchers. In 1961 when he was on wheat harvest with his dad, he met his wife, Carole, in South Dakota, and they were married on December 28th, 1963. They initially lived in Gotebo for a short time before moving back to South Dakota to work on Carole’s Uncle’s farm for three years. They then moved to Pierre, SD and Jim worked for a construction firm. Their son Kevin was born in 1968, and he was a year old when they moved to Oklahoma City. Their second son, Steven, was born in 1972, in Oklahoma City. Jim was a loving husband, father, and his family was his world. He was a hard worker, whether it was at work, or at home. In his spare time, he worked on lawn mowers in his garage. He also took his boys fishing, and every year the family made a trip to South Dakota to visit the grandparents and cousins on his wife’s side of the family. These were special times. He worked for Auxier-Scott Construction for several years; then worked for many years at Haskell-Lemon Construction as their paving equipment hauler. After suffering a serious head injury in a work-related accident in 2000, his work life changed over the next several years and he retired in 2008. After his accident, life was never quite the same, and the beginnings of dementia became apparent in 2009. In 2018, Jim and Carole moved to Edmond, OK to be closer to their oldest son, Kevin, and his family. In 2019, Jim’s condition was officially diagnosed as Alzheimer’s. He was cared for at home by his loving wife until the last stage of the disease. He then entered Autumn Leaves Memory Care facility in Edmond, but after only two weeks, he had to be transferred to OU Hospital where he spent the next month. He was discharged from OU on December 28th, 2020 and was transferred to Storey Oaks Memory Care facility in Oklahoma City. He was there only six days before his untimely death on January 3rd, 2021. This terrible disease took from him not only a lifetime of memories of himself, his family, relatives, and friends, but over the last several years it robbed his family of a loving husband and father. In the end, it took his life. Jim was preceded in death by his parents, Roy and Helen Geis, brother Lamar, sister Deloris Whittington and her husband Roy, niece Sherry Whittington, and many aunts, uncles, and cousins. He is survived by his wife Carole of 57 years, son Kevin and wife Christie of Oklahoma City, OK, and son Steven and wife Cynthia of Corinth, TX. He is also survived by seven grandchildren, James, Justin, Emmalee, and Kaylee all of Oklahoma City, OK, and Brayden, Dallin, and Savanna, all of Corinth TX, brother Leslie (Butch) of Shawnee, OK, and many cousins, nieces, and nephews. Visitation will be from 6-8pm Thursday, January 7th, at Crawford Funeral Home. Funeral Service honoring Jim will be at Crawford Funeral Chapel on Friday, January 8th at 10am. Immediately following the service, please join the family for lunch in the reception room at the Funeral Home. Interment will follow at Roselawn Cemetery on Okeene, OK, where his grandson Justin Geis will say a few words in memory of his grandpa. Services Friday will be made available via livestream, here on Jim's tribute page, just prior to services beginning. In lieu of flowers, please consider making a donation to the Alzheimer’s Research Foundation, to help them in their search for a solution to this disease. No one should have to go through this hell. Alzheimer's Association Donation https://act.alz.org/site/Donation2?df_id=32112&32112.donation=form1

The family of Jimmie Geis created this Life Tributes page to make it easy to share your memories.

Send flowers to the Geis family.