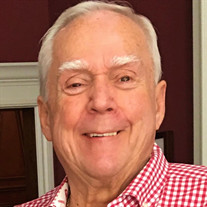 Jim (not JAMES!) Malone Thompson of Edmond, Oklahoma passed away on February 8th, 2021. But Dear God, he did not want to. He beat multiple heart attacks in the 70’s, two bouts of Covid last year, and more tornadoes than you can shake an Oklahoma stick at: he was a mountain of a man. When he entered the room, it felt like he was the only thing in it and he will be deeply missed by all who knew him. He was born on May 12, 1940 in Marshall, AR to Fred and Opal Thompson. He grew up in Texas and Kansas, then went on to play a tough-as-nails nose guard for the Pittsburg State Fighting Gorillas in Pittsburg, KS. After college he joined the Army Reserves in 1962. While home on holiday leave he met the love of his life, Leta Rae McCabe, while she was wrapping presents at a local Wichita, KS department store. It was love at first sight and they were married on June 16th, 1963… hence one of their favorite sayings was born, “Marry me in ‘63”. Jim was a true salesman at heart, starting his sales career with Curtis Mathis, hitting the road from Dallas to Cincinnati, Nashville and Lincoln. He then moved on to work in his family’s business, Fred Thompson TV, in Arizona alongside his father for many years. Never one to settle in one place too long, he accepted a position with Colortyme, Inc. that moved his family to a few more states with a final move from Seattle to Athens, TX where he worked as the Buyer for Colortyme, Inc. In his later years Jim and Leta Rae moved to Edmond, OK where Jim ran an independent sales office and he sold Sealy, Simmons and Serta branded mattresses to the rent to own industry. Jim and Leta Rae were married for FIFTY SEVEN(!) years. He was most proud of his three children and five grandchildren, delighting strangers with stories of their accomplishments if they wanted to hear them or not. He loved to play golf, dance to Fats Domino, Little Richard & Chuck Berry and sit with his beloved German Shepherd, Gunther. Jim is survived by his wife Leta Rae; his three children Scott, Matt and Jamee; his daughter in law Wendy; Grandchildren Ashley, James, Ryan, Mack, Fin and grandson in law Cade. Jim is also survived by his sisters Patricia Gratopp and Pamela Bice along with multiple nieces and nephews. He was preceded in death by his parents Fred and Opal Thompson, his brother Wes Thompson and nephews Austin Bice and Alex Paredes. Whenever Jim moved his family to a new town or state, in hope of a better future (which he secured mightily), the family had a ritual. They would pack the car, put on some Willie Nelson and sing, ‘On The Road Again’. And now Jim is out hitting that road once again, but he is not alone. We will always be with him and he with us. We were the best of friends, and the world kept turning his way. There will be a memorial service held to remember and celebrate Jim’s life, for family and close friends, on Sunday, March 14, 2021 at 1:00pm at Crawford Family Funeral Service. Services will be made available via livestream here on Jim’s tribute page, just prior to services beginning. In lieu of flowers the family of Jim asks you please consider making a memorial donation to either of the below programs. TSDF Austin Bice Memorial Fund The San Diego Foundation 2508 Decatur Rd, Suite 200 San Diego, CA 92106 619-235-2300 Ground Zero Emergency Training Center-Oklahoma https://www.groundzerosaveslives.com/support/

Jim (not JAMES!) Malone Thompson of Edmond, Oklahoma passed away on February 8th, 2021. But Dear God, he did not want to. He beat multiple heart attacks in the 70&#8217;s, two bouts of Covid last year, and more tornadoes than you can shake an... View Obituary & Service Information

The family of Jim Thompson created this Life Tributes page to make it easy to share your memories.

Jim (not JAMES!) Malone Thompson of Edmond, Oklahoma passed away...