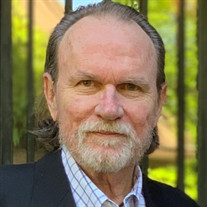 Jerry (Jay) Wayne Morton, 69, of Edmond, OK, passed away on December 18, 2020. He was born in Augusta, Georgia on November 27, 1951, the son of Jerry and Vettye Morton, who preceded him in death. Jay was married to Nancy Mae Williamson who was his sole-mate for 19 years as they enjoyed life together as one. He is survived by his wife Nancy, his son Ryan, his daughter Jennifer James and husband Chris, son Brian Thompson and his wife Angela, his four grandchildren, Baylee, Ashley, Max and Emma, niece Laura Williams and husband Danny, numerous great nieces and nephews and even great great nieces and nephews. Jay and Nancy received the nicknames of Gamp and Gam when the grandchildren were born. There was so much to love about Gamp that they all can’t be listed here, but let us share a few things that made us love him as we did. Jay was not just the ordinary scuba diver. He earned the highest diving certificate that could be awarded. He earned a Master Scuba certificate that designated him as one of the world’s most elite. He backed that up with a certificate as an accomplished rescue diver. Throughout his career, he taught hundred of students to safely dive and become certified. Most of those he taught, he did not charge because he was not in it for the money, it was for the love of the sport. After all was said and done, he made over 5000 dives without serious incident. Many of those dives were in the Gulf of Mexico in the Middlegounds for three days where he slept on top of the engine. There the diving was dangerous. The dives were in excess of 120 feet while spear fishing and brushing away the occasional curious sharks. He handled it as if drifting around in a swimming pool. Jay was also an avid hunter. He was a remarkable shot. Jay was a supporter of the Grand National Quail Hunt that takes place every year in Enid OK. It draws celebrities from around the country as well as some of the best shooters. Jay is unique in that he was one of very few that won the individual Top Gun award as well as won the team championship the same year. His contribution to the Quail Club is one of the reasons that it still thrives to this day. Jay was also the consummate fisherman. He would travel to Canada, Mexico and around the US to experience the different species in those areas. He always won the big fish bet. Finally his fishing buddies got smart and started giving the best second fish award out so that someone other than Jay could win. He truly enjoyed his moments fishing with the grandkids at the Lakehouse near Arcadia. Not as exciting, but more appreciated, Jay was a master chef. He loved to try different recipes for his family and friends. Nobody ever asked “what was for dinner”, they just showed up and enjoyed the fruits of his labor. He was so accomplished that he was recruited by the Food TV network to give his opinion on recipes that were to be presented on national TV. That was a task he did not take lightly. Gamp enjoyed teaching the grand kids how to cook in the kitchen subjected them to his cardinal rule. He made a rule that each one would have to try at least one bite of whatever they were making. Jay owned an operated United Engines until its sale in the 1990's. It was one of the most successful dealerships in the Southeast under his leadership. After sale of UE, Jay became a director of Quail Creek Bank here in OKC until his death. His tutelage there helped elevate the bank to be ranked in the top 1% of banks in the US. It was the highest ranking of any bank in the state. As if the preceding is not enough, yes there is more. He was also a magnificent artist. His painting and caricatures were present throughout the house and on display for all to see. Nobody could believe he was that talented with a paint brush. He had a passion for Monte Blanc pens and his old sci-fi movies. More important than anything was spending time with Gam. But most of all, Jay was a husband, a father, a friend, a mentor, a “Gamp”, a partner, and the shining light of what we all hope inside that we could be some day. As those of us who knew him read this obituary we tear up in remembrance. To those of you who did not know him, we are sorry. You would have loved him. Thank you for letting us share our love of Jay. For the safety of all, there will be no funeral or memorial service. Our prayers to you to stay healthy in these unique times.

Jerry (Jay) Wayne Morton, 69, of Edmond, OK, passed away on December 18, 2020. He was born in Augusta, Georgia on November 27, 1951, the son of Jerry and Vettye Morton, who preceded him in death. Jay was married to Nancy Mae Williamson who was... View Obituary & Service Information

The family of Jerry “Jay” Morton created this Life Tributes page to make it easy to share your memories.

Send flowers to the Morton family.