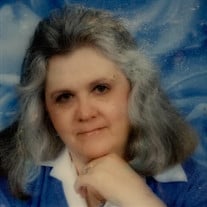 Jean Heidi Morley left her earthly home in Edmond, Oklahoma for her heavenly home on Friday February 11, 2022. Heidi was born in Euclid, Ohio on October 21, 1949, to Jean F. and George B. Walworth. She was 72 years old when she departed. Heidi grew up with four brothers, Glenn, Danny, Billy and Paul. Being the only girl, she naturally learned very early that in order to hold her own she had to be competitive. This was especially evident when the siblings would go roller skating, ice skating or played ice hockey on the local pond. Her tenacity, however, would not be overshadowed by her kindness and generosity, which was well throughout her life. Heidi spent her school years in Ohio, graduating from Euclid H.S. in 1967. Like most teenagers, a major milestone that year was completing “Driver Traffic and Education” class sponsored by AAA. A couple years later she welcomed her first child, Cindy in 1969, followed by Tammy in 1970. Heidi left Ohio in 1984, moving to Denver with her girls in tow. There she got a job with Farmers Insurance in the claims department and enjoyed singing in the church choir at Applewood Baptist Church. Here she met the love of her life, Al Morley and they were married in 1992. After nearly 20 years of service, Heidi retired from Farmers Insurance and began working at Senior Resource Center. Here she exercised her compassion by caring for homebound senior citizens. She would cook, clean and go shopping for them. In 2018 Heidi retired again after which she and Al moved to Oklahoma so she could be closer to her extended family. Once they were settled in Edmond, Heidi kept busy with appointments, whether medical, dental or to get her hair done. Additionally, she enjoyed holidays with family and celebrated no less than 10 birthdays per year. Throughout her life she never lost her competitive spirit. She especially enjoyed watching sports on television with Al. Her favorite teams to follow were the Cleveland Indians, Denver Broncos and Colorado Avalanche. She could even quote the most current stats of each team and knew many of the players on the roster. Heidi enjoyed decorating her house with hummingbirds, lighthouses and just about anything purple. One of her favorite ways to spend her free time was to watch Crossings Community Church sanctuary worship services, often spotting her daughter and son-in-law in the choir. On one occasion she attended a children’s choir presentation in which her grandchildren participated and was surprised to meet one of her favorite Christian singers, Sandi Patty, artist in residence. The joy of that experience helped her persevere the radiation she was receiving at the time to treat her breast cancer. Her husband testifies that Heidi was a fantastic wife and partner, and a great caretaker. Some of their favorite times together was going to their favorite restaurant, Benihana in Denver, Colorado. She was the happiest when she was with her family whom she loved greatly. Heidi is survived by her husband of 29 years, Alan Morley; brothers Glenn, Dan and Billy; daughter Cyndi Bedzyk and her companion, Dan Warren; daughter Tammy Munns and husband John; Stepdaughters Gayla Westbrook and husband Bryon, Denise Dozeman and husband Steve, Mitzi Morley; grandchildren Michelle, April, Ashley, Nichole, Christine, Brandon and Briana; along with 10 great grandchildren. She is preceded in death by her parents George and Jean Walworth and her brother Paul Walworth. A service celebrating Heidi’s life will be at 2pm on Tuesday, February 22nd at Crawford Family Funeral Service in Edmond.

Jean Heidi Morley left her earthly home in Edmond, Oklahoma for her heavenly home on Friday February 11, 2022. Heidi was born in Euclid, Ohio on October 21, 1949, to Jean F. and George B. Walworth. She was 72 years old when she departed. Heidi... View Obituary & Service Information

The family of Jean "Heidi" Morley created this Life Tributes page to make it easy to share your memories.

Send flowers to the Morley family.