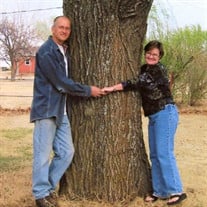 Janice Ramsey April 1, 1959 - October 7, 2021 Janice L. Ramsey passed away October 7, 2021, after a brief battle with cancer. Her family and friends mourn her passing, but also choose to honor her by celebrating her life. Janice was born on April 1, 1959, in Norman, Oklahoma, grew up in Edmond, Oklahoma, and spent her later years in life in Shawnee, Oklahoma. She was a valedictorian of the Edmond Memorial High School Class of 1977. She graduated from Central State University, now the University of Central Oklahoma, with her accounting degree and later became a Certified Public Accountant. She spent a large part of her accounting career at Kerr-McGee Corporation and retired from Tronox Incorporated. Janice married Terry Ramsey in 1978. Together they raised two beautiful daughters, Amy and Melissa. Janice was also blessed with two grandchildren, Owen and Dahlia. She loved them all and would often talk about them with friends. Her family spent time together at the beach, both at the Atlantic and Pacific Oceans, and enjoyed camping and exploring natural places in Oklahoma and the Rocky Mountains of New Mexico and Colorado. Janice was a passionate and dedicated professional and was good at mentoring others. She was encouraging and was a great listener. She offered helpful advice, especially if she had been through a similar situation. Janice was thoughtful – always thinking of what someone else might need or enjoy. She was kind to everyone, never passing judgement on the person or the situation. Her smile and her low chuckle lit up the room and both were contagious! She enjoyed nature, gardening, flowers, her favorite color green, beautiful sunsets, ocean waves, sand dollars, her pets, archiving family photos, taking care of others, and took time to appreciate the things around her. She loved her family, friends, and life. Janice was preceded in death by her husband, Terry, and father, Sidney Charles Terry. She is survived by her daughter, Amy, son-in-law, Derik and granddaughter, Dahlia; her daughter, Melissa, and grandson, Owen; her mother, Beverly Terry; her brother, Ross Terry and his family; her mother-in-law, Carol Terry; and her father-in-law, Jack Ramsey. She is also survived by numerous cousins, extended family members, and many close friends. After Terry passed, Janice missed "her guy." She would often remind us not to take our families for granted. She would tell us to take time and talk to them and give them hugs. We are saying goodbye decades too soon. Terry Ramsey June 27, 1957- April 12, 2018 Terry Shane Ramsey passed away April 12, 2018. His family and friends have missed him, but also choose to honor him by celebrating his life. Terry was born on June 27, 1957, in Fort Worth, TX, grew up in Oklahoma City, OK and spent his later years in life in Shawnee, OK. Terry was named after a movie cowboy - how fitting for that tall, dark and handsome Oklahoma man. He was a man of integrity, who fiercely loved his family and friends. He had a way with people, an easy smile, and laugh that was contagious. Terry loved the country and city life was too confining for him. He needed the outdoors, the sunshine and rain, snow and the stars. He passed that love of the outdoors to his girls, Amy and Melissa. Camping, fishing, hiking, noticing the smallest of creatures, never missing the beauty around him. He had a special way with nature, from his garden to his animals. Terry graduated from John Marshall High School in Oklahoma City. Then, he married Janice Terry in 1978. Together they raised two daughters, Amy and Melissa. Terry and Janice were also blessed with two grandchildren, Owen and Dahlia. He spent time with all of his family outside, sometimes teaching the grandkids how to fish or blow bubbles, either at their home in Shawnee, or their girls’ homes in Tahlequah, Oklahoma and Olympia, Washington. Terry was a rock for his family. He was strong in the tough times and never flinched from being that foundation - gentle when you needed care, smart when you needed advice, funny when you needed a laugh. He was always ready with a hug and he gave the best hugs. He was the first grandchild in a large extended family and was devoted to them throughout his life. He was especially devoted to his grandmother, Vera Roper, and was her daily companion in her later years. Terry was a loving and strong husband, father, brother, uncle, son, grandson, and friend. Terry is survived by his daughter, Amy, son-in-law, Derik and granddaughter, Dahlia; his daughter, Melissa, and grandson, Owen; his mother, Carol Terry; his father, Jack Ramsey; his sister, Lisa Bergstrom, her husband Ric, and his three nephews, Christian, Jackson and Nathan. He is also survived by numerous cousins and extended family members.

Janice Ramsey April 1, 1959 - October 7, 2021 Janice L. Ramsey passed away October 7, 2021, after a brief battle with cancer. Her family and friends mourn her passing, but also choose to honor her by celebrating her life. Janice was born on... View Obituary & Service Information

The family of Janice & Terry Ramsey created this Life Tributes page to make it easy to share your memories.

Send flowers to the Ramsey family.