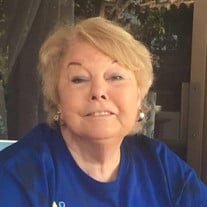 A service celebrating the life of Janet Rasnick will be at 2pm on Friday, May 7th at Crawford Family Funeral Service, Edmond. Janet Sue Rasnick, 76, of Edmond, passed away on April 24th at her residence. Janet was born on September 11, 1944 to Carlton Westley Chilcott and Zelma Pauline Chilcott in Santa Monica, CA. After graduating from Moorpark High School in 1962, she went on to college to purse her associates degree. Janet worked various jobs in the Ojai, Moore Park, and Simi Valley area before she landed her first major job as an assembly tech for Amphenol Aerospace. She later worked for Aerostar on circuit board fabrication for avionics in the civilian light aircraft field. She then worked at Tinker A.F.B, New Orleans Job-Core, and Bob Howard Chevrolet, Mercedes, and Lexus. She then met Carl Dewayne Harmon, they wed in 1964, and they would go on to have two children, Jeffrey Dewayne Harmon and Carla Sue Harmon. Janet and Carl divorced in 1970. Janet met Kenneth Martin Rasnick and the two were married in 1973. Janet dedicated her life to being a fantastic and wonderful mother. Janet became an Air Force wife and excelled at the complicated logistics of supporting the needs of the family consisting of husband Kenneth, Carla and Jeff, and stepchildren Kenny, Danny, & Lori. She also helped her mother, Zelma, who came to live with the family after Carlton’s passing. Ida and Paul Rasnick, Kenneth’s parents, also eventually came to live with the family. Janet continually supported all of them through the many trials, tribulations, and passions of their lives. She continually supported her husband through the difficulties of being a career Air Force and Vietnam veteran as well as all her family members through whatever endeavors they chose to pursue. She made it her mission to improve all the lives of her family and friends around her. Janet traveled the world with Kenneth and her family. She lived at Vandenberg A.F.B in California, Torrejon A.F.B. in Spain, Eielson A.F.B. in Alaska, and Tinker A.F.B. in Oklahoma, just to name a few places the U.S.A.F duty stations took them. Janet was passionate about horseback riding and her horses, Major and Booger. When she was not filling her home with warmth and kindness, she could be found practicing arts and crafts and socializing with friends. Janet’s warmth, compassion, and humor will be greatly missed. Because of her absence, the world will be a much darker place for those who had the privilege to get to know her during her lifetime. Janet always thought of other people first before herself. Janet was predeceased by Carla Harmon, Kenneth Rasnick, Zelma and Carlton Chilcott. She is survived by Jeff and Colleen Harmon, Kenny and Claudia Rasnick, Danny and Lori Rasnick. The family requests that all flowers and notes are sent to Crawford Family Funeral Home. There will be a Memorial / Celebration of Life on May 7th, 2021 @ 2:00 PM at the Crawford Family Funeral Home Chapel in Edmond.

A service celebrating the life of Janet Rasnick will be at 2pm on Friday, May 7th at Crawford Family Funeral Service, Edmond. Janet Sue Rasnick, 76, of Edmond, passed away on April 24th at her residence. Janet was born on September 11, 1944... View Obituary & Service Information

The family of Janet Rasnick created this Life Tributes page to make it easy to share your memories.

A service celebrating the life of Janet Rasnick will be at 2pm...

Send flowers to the Rasnick family.