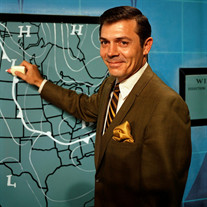 James “Jim” Williams passed away peacefully on February 10th, 2020 at the age of 91. He was a loving husband, father of 5, grandfather of 12, and great grandfather of 13. To his family he was Daddy, Dad, and Papa Jim. To many Oklahomans, he was simply their “Weatherman”. Jim grew-up in Muskogee, Oklahoma and graduated from Muskogee High School in 1946. During these formative years he developed an appreciation for hard work. His first job started when he was just 10 years old selling magazines. Over the next 8 years he worked in sales, built picture frames, was a cook, had a paper route, was a lifeguard, a soda jerk, and drove a forklift. He loved learning and doing new things. During his childhood, he also learned to play the piano. The piano would become a passion of his especially later in life. After graduating from high school, Jim attended Muskogee Junior College before enrolling full-time at Oklahoma A&M (OSU). He worked numerous jobs throughout college before graduating in 1951. During his time at OSU, he met the love of his life Jo Darlene DeMar. Jim and Darlene married on September 1, 1951. They were married for 61 blessed years. From 1952 to 1956, he was an instructor for the Air Force and taught weather to new pilots. From 1956 to 1957 he was employed by both TWA and Continental Airlines as a weather forecaster. In 1958 he embarked on a new job after auditioning for WKY-TV, Channel 4 in Oklahoma City. He would spend the next 32 years delivering the weather to countless Oklahomans. He was known for his accurate forecasts and his steady and calm demeanor during severe weather advisories. He truly loved his career. During his retirement years Jim continued his life-long passion for wood-working projects. Over his life he built countless pieces of furniture and specialty items. This later expanded into larger-scale projects including the design and construction of three separate log homes. He was also an avid piano player. He spent hours playing his beloved Steinway. For those that knew him best he will be remembered for his zest for life, his insatiable desire to learn new things, and his love of people. To quote Jim directly, “I’ve had a Great Life!” A private memorial service will be held on Saturday, February 15th. Well wishes can be sent to Crawford Funeral Service, 610 NW 178 Street, Edmond OK 73012 https://kfor.com/news/kfor-legend-former-chief-meteorologist-jim-williams-dies/

The family of James Dean Williams created this Life Tributes page to make it easy to share your memories.

Send flowers to the Williams family.