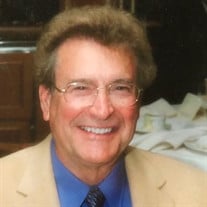 James Daymon Sasnett was born October 20, 1941 to James Edgar and Yuther Irene Sasnett in Red Oak, Oklahoma and was called to his Heavenly Home on Monday, April 13, 2020. He attended school in Red Oak, where he played on the basketball team, earned the name “Flash” and was awarded a college scholarship. Graduating in 1959, he received an award for being "Never Absent nor Tardy" for all 12 years of his schooling. James carried that honor proudly his entire life, despite his wife and daughter's lack of punctuality. Never one to linger in making decisions, his plans were always well thought out. Much to his parents’ chagrin, he passed on the college scholarship. He was ready to get on with life – after all – he was all of 19 years old! After a stint in business school studying drafting and the National Guard, he hit the road to pursue other avenues. Thus James Sasnett – entrepreneur personified – experimented with professions that he found more challenging and satisfying. Even though he loved the outdoors, he knew that working outdoors in the heat of summer and the cold of winter in Oklahoma was not what he wanted. So, he concentrated on an indoor profession. At that point in time his brother-in-law introduced him to cutting and styling hair. “Ah“ he thought this is the way to go. Indoors, basically 8 – 5, his own boss – James decided to give barbering a try. He was a natural. We all know the rest of that story. He was self-employed as a barber in the metro area for over 50 years. It turned out that he was a whiz with scissors and gave a heck of a shave while he visited and made friends. James built a loyal base of almost 350 customers who followed him from the 16th St. Plaza Barber Shop, to Kustom Kuts on 63rd and Western, to eventually Nichols Hills Barber Shop. He never met a stranger and always saw someone he knew wherever he went. He enjoyed hunting, fishing, and traveling. He and Suzanne visited several countries including Australia, Italy, Spain, France, Switzerland, Great Britain, among others. Their travels included a number of cruises. Suzanne shared that James was like a little child full of excitement when they were planning a trip. He became a pro at packing a suitcase and tried his best to “teach” Suzanne how to pack and re-pack! Due to wonderful parents who taught him to keep his eye open for opportunities he paid attention to finding ways to “make a buck or two.” Early on he learned to install storm doors and windows after the barber shop closed. Later he studied in the evening to become a licensed electrician. Starting another business named Affordable Alarms, he then installed and monitored alarm systems and sprinkler systems. Was there anything that man could not learn to do? His family says they think not! James was an amazing husband, father, grandfather, brother, and friend everyone could always count on to show up and step up when needed. Although he was raised in church, he re-dedicated his life to the Lord at the age of 50 and faithfully witnessed and led many to Christ. A man in a barber chair had nowhere to run when James began sharing with him how his own life had changed dramatically when he accepted Christ. James has been joyfully united in Heaven with his parents; a granddaughter Avery Sasnett; and a great-niece, Tori Mills. He is survived by his devoted wife of 30 years - Suzanne; daughter Kim and her husband, Dr. Ray Plant and their son Ryder; sisters Connie Jackson of Fort Worth, TX, Phyllis Duty of Sallisaw, OK, and Darlene Duncan of Moore, OK and a host of nieces and nephews. James and his family would be honored if in lieu of flowers or other memorial gifts, a donation in his memory be made to Heritage Fellowship Church, 329 W. Edmond Rd, Edmond, OK 73003 Services celebrating the life of James will be held on Saturday, June 13, 2020 at 2 p.m. at the Crawford Funeral Service Chapel with a reception following the service for family and friends.

James Daymon Sasnett was born October 20, 1941 to James Edgar and Yuther Irene Sasnett in Red Oak, Oklahoma and was called to his Heavenly Home on Monday, April 13, 2020. He attended school in Red Oak, where he played on the basketball team,... View Obituary & Service Information

The family of James D. Sasnett created this Life Tributes page to make it easy to share your memories.

Send flowers to the Sasnett family.